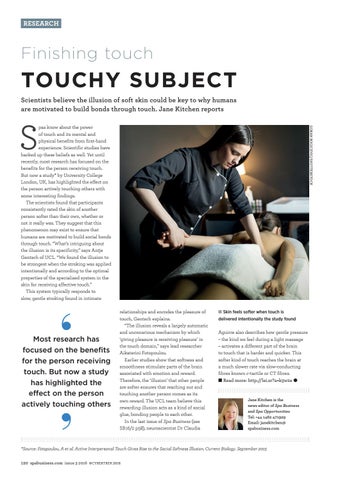 TOUCHY SUBJECT Scientists believe the illusion of soft skin could be key to why humans are motivated to build bonds through touch. Jane Kitchen reports

Most research has focused on the benefits for the person receiving touch. But now a study has highlighted the effect on the person actively touching others

pas know about the power of touch and its mental and physical benefits from first-hand experience. Scientific studies have backed up these beliefs as well. Yet until recently, most research has focused on the benefits for the person receiving touch. But now a study* by University College London, UK, has highlighted the effect on the person actively touching others with some interesting findings. The scientists found that participants consistently rated the skin of another person softer than their own, whether or not it really was. They suggest that this phenomenon may exist to ensure that humans are motivated to build social bonds through touch. “What’s intriguing about the illusion is its specificity,” says Antje Gentsch of UCL. “We found the illusion to be strongest when the stroking was applied intentionally and according to the optimal properties of the specialised system in the skin for receiving affective touch.” This system typically responds to slow, gentle stroking found in intimate relationships and encodes the pleasure of touch, Gentsch explains.  “The illusion reveals a largely automatic and unconscious mechanism by which ‘giving pleasure is receiving pleasure’ in the touch domain,” says lead researcher Aikaterini Fotopoulou.  Earlier studies show that softness and smoothness stimulate parts of the brain associated with emotion and reward. Therefore, the ‘illusion’ that other people are softer ensures that reaching out and touching another person comes as its own reward. The UCL team believe this rewarding illusion acts as a kind of social glue, bonding people to each other.  In the last issue of Spa Business (see SB16/2 p58), neuroscientist Dr Claudia

Aguirre also describes how gentle pressure – the kind we feel during a light massage – activates a different part of the brain to touch that is harder and quicker. This softer kind of touch reaches the brain at a much slower rate via slow-conducting fibres known c-tactile or CT fibres. n Read more: http://lei.sr?a=k3w2e l