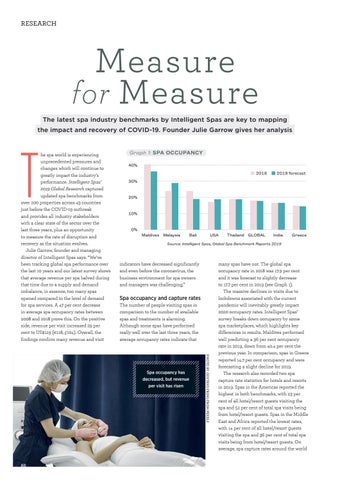 Measure for Measure The latest spa industry benchmarks by Intelligent Spas are key to mapping the impact and recovery of COVID-19. Founder Julie Garrow gives her analysis

he spa world is experiencing unprecedented pressures and changes which will continue to greatly impact the industry’s performance. Intelligent Spas’ 2019 Global Research captured updated spa benchmarks from over 200 properties across 43 countries just before the COVID-19 outbreak and provides all industry stakeholders with a clear state of the sector over the last three years, plus an opportunity to measure the rate of disruption and recovery as the situation evolves. Julie Garrow, founder and managing director of Intelligent Spas says: “We’ve been tracking global spa performance over the last 10 years and our latest survey shows that average revenue per spa halved during that time due to a supply and demand imbalance, in essence, too many spas opened compared to the level of demand for spa services. A 47 per cent decrease in average spa occupancy rates between 2008 and 2018 prove this. On the positive side, revenue per visit increased 29 per cent to US$129 (€118, £104). Overall, the findings confirm many revenue and visit

indicators have decreased significantly and even before the coronavirus, the business environment for spa owners and managers was challenging.”

Spa occupancy and capture rates The number of people visiting spas in comparison to the number of available spas and treatments is alarming. Although some spas have performed really well over the last three years, the average occupancy rates indicate that PHOTO BY GUSTAVO FRING FROM PEXELS

Spa occupancy has decreased, but revenue per visit has risen