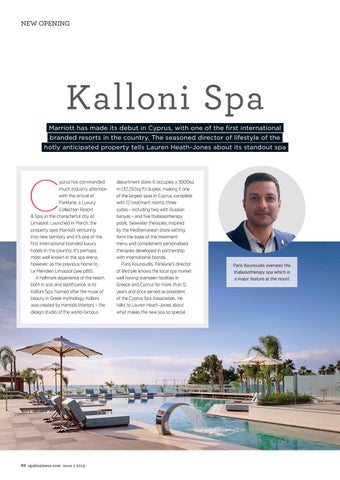 Kalloni Spa Marriott has made its debut in Cyprus, with one of the first international branded resorts in the country. The seasoned director of lifestyle of the hotly anticipated property tells Lauren Heath-Jones about its standout spa

yprus has commanded much industry attention with the arrival of Parklane, a Luxury Collection Resort &amp; Spa, in the characterful city of Limassol. Launched in March, the property sees Marriott venturing into new territory and it’s one of the first international branded luxury hotels in the country. It’s perhaps most well known in the spa arena, however, as the previous home to Le Méridien Limassol (see p88). A hallmark experience of the resort, both in size and significance, is its Kalloni Spa. Named after the muse of beauty in Greek mythology, Kalloni was created by Harrods Interiors – the design studio of the world-famous

department store. It occupies a 3000sq m (32,292sq ft) duplex, making it one of the largest spas in Cyprus, complete with 12 treatment rooms, three suites – including two with Russian banyas – and five thalassotherapy pools. Seawater therapies, inspired by the Mediterranean shore setting, form the basis of the treatment menu and complement personalised therapies developed in partnership with international brands. Paris Kounoudis, Parklane’s director of lifestyle, knows the local spa market well having overseen facilities in Greece and Cyprus for more than 12 years and once served as president of the Cyprus Spa Association. He talks to Lauren Heath-Jones about what makes the new spa so special.