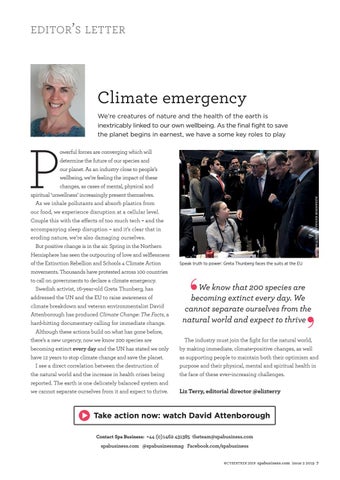 Climate emergency owerful forces are converging which will determine the future of our species and our planet. As an industry close to people’s wellbeing, we’re feeling the impact of these changes, as cases of mental, physical and spiritual ‘unwellness’ increasingly present themselves. As we inhale pollutants and absorb plastics from our food, we experience disruption at a cellular level. Couple this with the effects of too much tech – and the accompanying sleep disruption – and it’s clear that in eroding nature, we’re also damaging ourselves. But positive change is in the air. Spring in the Northern Hemisphere has seen the outpouring of love and selflessness of the Extinction Rebellion and Schools 4 Climate Action movements. Thousands have protested across 100 countries to call on governments to declare a climate emergency. Swedish activist, 16-year-old Greta Thunberg, has addressed the UN and the EU to raise awareness of climate breakdown and veteran environmentalist David Attenborough has produced Climate Change: The Facts, a hard-hitting documentary calling for immediate change. Although these actions build on what has gone before, there’s a new urgency, now we know 200 species are becoming extinct every day and the UN has stated we only have 12 years to stop climate change and save the planet. I see a direct correlation between the destruction of the natural world and the increase in health crises being reported. The earth is one delicately balanced system and we cannot separate ourselves from it and expect to thrive.

We’re creatures of nature and the health of the earth is inextricably linked to our own wellbeing. As the final fight to save the planet begins in earnest, we have a some key roles to play

Speak truth to power: Greta Thunberg faces the suits at the EU

We know that 200 species are becoming extinct every day. We cannot separate ourselves from the natural world and expect to thrive The industry must join the fight for the natural world, by making immediate, climate-positive changes, as well as supporting people to maintain both their optimism and purpose and their physical, mental and spiritual health in the face of these ever-increasing challenges.