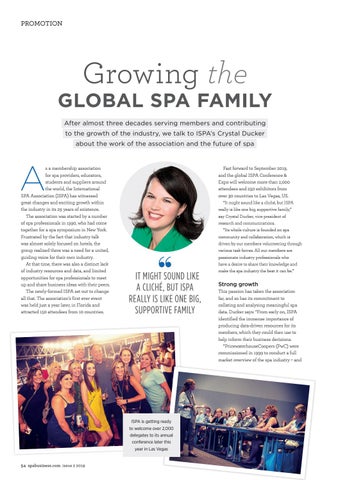 GLOBAL SPA FAMILY After almost three decades serving members and contributing to the growth of the industry, we talk to ISPA’s Crystal Ducker about the work of the association and the future of spa

s a membership association for spa providers, educators, students and suppliers around the world, the International SPA Association (ISPA) has witnessed great changes and exciting growth within the industry in its 29 years of existence. The association was started by a number of spa professionals in 1990, who had come together for a spa symposium in New York. Frustrated by the fact that industry talk was almost solely focused on hotels, the group realised there was a need for a united, guiding voice for their own industry. At that time, there was also a distinct lack of industry resources and data, and limited opportunities for spa professionals to meet up and share business ideas with their peers. The newly-formed ISPA set out to change all that. The association’s first ever event was held just a year later, in Florida and attracted 150 attendees from 10 countries.

Fast forward to September 2019, and the global ISPA Conference & Expo will welcome more than 2,000 attendees and 250 exhibitors from over 30 countries to Las Vegas, US.

ISPA is getting ready to welcome over 2,000 delegates to its annual conference later this year in Las Vegas 54 spabusiness.com issue 2 2019

“It might sound like a cliché, but ISPA really is like one big, supportive family,” say Crystal Ducker, vice president of research and communications. “Its whole culture is founded on spa community and collaboration, which is driven by our members volunteering through various task forces. All our members are passionate industry professionals who have a desire to share their knowledge and make the spa industry the best it can be.”

Strong growth This passion has taken the association far, and so has its commitment to collating and analysing meaningful spa data. Ducker says: “From early on, ISPA identified the immense importance of producing data-driven resources for its members, which they could then use to help inform their business decisions. “PricewaterhouseCoopers (PwC) were commissioned in 1999 to conduct a full market overview of the spa industry – and