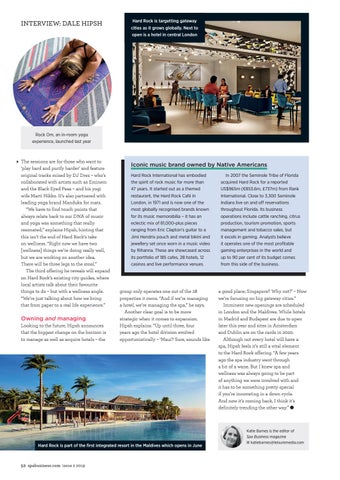 Hard Rock is targetting gateway cities as it grows globally. Next to open is a hotel in central London

The sessions are for those who want to ‘play hard and purify harder’ and feature original tracks mixed by DJ Drez – who’s collaborated with artists such as Eminem and the Black Eyed Peas – and his yogi wife Marti Nikko. It’s also partnered with leading yoga brand Manduka for mats. “We have to find touch points that always relate back to our DNA of music and yoga was something that really resonated,” explains Hipsh, hinting that this isn’t the end of Hard Rock’s take on wellness. “Right now we have two [wellness] things we’re doing really well, but we are working on another idea. There will be three legs to the stool.” The third offering he reveals will expand on Hard Rock’s existing city guides, where local artists talk about their favourite things to do – but with a wellness angle. “We’re just talking about how we bring that from paper to a real life experience.”

Owning and managing Looking to the future, Hipsh announces that the biggest change on the horizon is to manage as well as acquire hotels – the

Iconic music brand owned by Native Americans Hard Rock International has embodied the spirit of rock music for more than 47 years. It started out as a themed restaurant, the Hard Rock Café in London, in 1971 and is now one of the most globally recognised brands known for its music memorabilia – it has an eclectic mix of 81,000-plus pieces ranging from Eric Clapton’s guitar to a Jimi Hendrix pouch and metal bikini and jewellery set once worn in a music video by Rihanna. These are showcased across its portfolio of 185 cafes, 28 hotels, 12 casinos and live performance venues.

group only operates one out of the 28 properties it owns. “And if we’re managing a hotel, we’re managing the spa,” he says. Another clear goal is to be more strategic when it comes to expansion. Hipsh explains: “Up until three, four years ago the hotel division evolved opportunistically – ‘Maui? Sure, sounds like

In 2007 the Seminole Tribe of Florida acquired Hard Rock for a reported US$965m (€853.6m, £737m) from Rank International. Close to 3,300 Seminole Indians live on and off reservations throughout Florida. Its business operations include cattle ranching, citrus production, tourism promotion, sports management and tobacco sales, but it excels in gaming. Analysts believe it operates one of the most profitable gaming enterprises in the world and up to 90 per cent of its budget comes from this side of the business.

a good place; Singapore? Why not?’ – Now we’re focusing on big gateway cities.” Imminent new openings are scheduled in London and the Maldives. While hotels in Madrid and Budapest are due to open later this year and sites in Amsterdam and Dublin are on the cards in 2020. Although not every hotel will have a spa, Hipsh feels it’s still a vital element to the Hard Rock offering. “A few years ago the spa industry went through a bit of a wane. But I knew spa and wellness was always going to be part of anything we were involved with and it has to be something pretty special if you’re innovating in a down cycle. And now it’s coming back, I think it’s definitely trending the other way.” l