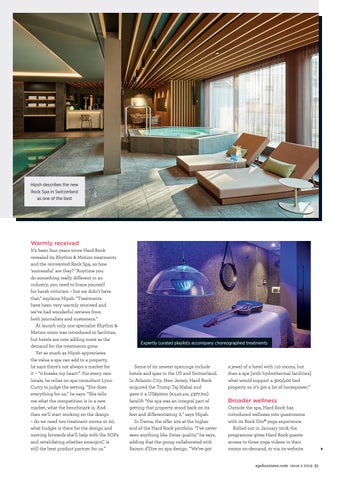 Warmly received It’s been four years since Hard Rock revealed its Rhythm & Motion treatments and the reinvented Rock Spa, so how ‘successful’ are they? “Anytime you do something really different in an industry, you need to brace yourself for harsh criticism – but we didn’t have that,” explains Hipsh. “Treatments have been very warmly received and we’ve had wonderful reviews from both journalists and customers.” At launch only one specialist Rhythm & Motion room was introduced to facilities, but hotels are now adding more as the demand for the treatments grow. Yet as much as Hipsh appreciates the value a spa can add to a property, he says there’s not always a market for it – “it breaks my heart!”. For every new locale, he relies on spa consultant Lynn Curry to judge the setting. “She does everything for us,” he says. “She tells me what the competition is in a new market, what the benchmark is. And then we’ll start working on the design – do we need two treatment rooms or 20, what budget is there for the design and moving forwards she’ll help with the SOPs and revalidating whether emerginC is still the best product partner for us.”

Some of its newest openings include hotels and spas in the US and Switzerland. In Atlantic City, New Jersey, Hard Rock acquired the Trump Taj Mahal and gave it a US$500m (€440.4m, £377.7m) facelift “the spa was an integral part of getting that property stood back on its feet and differentiating it,” says Hipsh. In Davos, the offer sits at the higher end of the Hard Rock portfolio. “I’ve never seen anything like Swiss quality,” he says, adding that the group collaborated with Raison d’Etre on spa design. “We’ve got

a jewel of a hotel with 110 rooms, but then a spa [with hydrothermal facilities] what would support a 300/400 bed property so it’s got a lot of horsepower.”

Broader wellness Outside the spa, Hard Rock has introduced wellness into guestrooms with its Rock Om® yoga experience. Rolled out in January 2018, the programme gives Hard Rock guests access to three yoga videos in their rooms on-demand, or via its website. spabusiness.com issue 2 2019 51