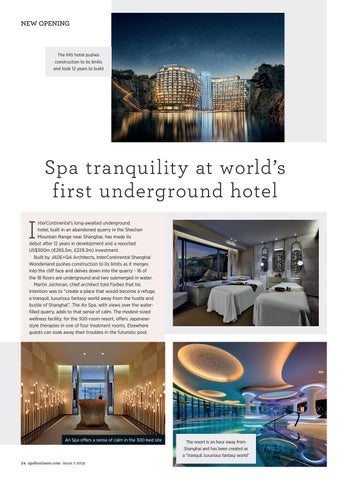 nterContinental’s long-awaited underground hotel, built in an abandoned quarry in the Sheshan Mountain Range near Shanghai, has made its debut after 12 years in development and a reported US$300m (€265.5m, £229.3m) investment. Built by JADE+QA Architects, InterContinental Shanghai Wonderland pushes construction to its limits as it merges into the cliff face and delves down into the quarry - 16 of the 18 floors are underground and two submerged in water. Martin Jochman, chief architect told Forbes that his intention was to “create a place that would become a refuge, a tranquil, luxurious fantasy world away from the hustle and bustle of Shanghai”. The An Spa, with views over the waterfilled quarry, adds to that sense of calm. The modest-sized wellness facility, for the 300-room resort, offers Japanesestyle therapies in one of four treatment rooms. Elsewhere guests can soak away their troubles in the futuristic pool.

The resort is an hour away from Shanghai and has been created as a “tranquil, luxurious fantasy world”