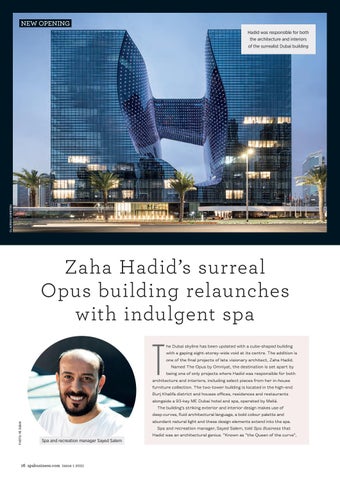 he Dubai skyline has been updated with a cube-shaped building with a gaping eight-storey-wide void at its centre. The addition is one of the final projects of late visionary architect, Zaha Hadid. Named The Opus by Omniyat, the destination is set apart by being one of only projects where Hadid was responsible for both architecture and interiors, including select pieces from her in-house furniture collection. The two-tower building is located in the high-end Burj Khalifa district and houses offices, residences and restaurants alongside a 93-key ME Dubai hotel and spa, operated by Meliá. The building’s striking exterior and interior design makes use of deep curves, fluid architectural language, a bold colour palette and abundant natural light and these design elements extend into the spa. Spa and recreation manager, Sayed Salem, told Spa Business that Hadid was an architectural genius. “Known as “the Queen of the curve”,