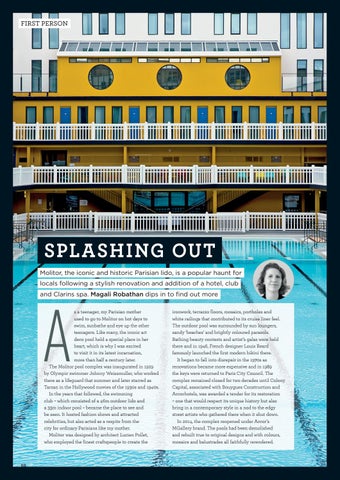 SPLASHING OUT Molitor, the iconic and historic Parisian lido, is a popular haunt for locals following a stylish renovation and addition of a hotel, club and Clarins spa. Magali Robathan dips in to find out more

s a teenager, my Parisian mother used to go to Molitor on hot days to swim, sunbathe and eye up the other teenagers. Like many, the iconic art deco pool held a special place in her heart, which is why I was excited to visit it in its latest incarnation, more than half a century later. The Molitor pool complex was inaugurated in 1929 by Olympic swimmer Johnny Weissmuller, who worked there as a lifeguard that summer and later starred as Tarzan in the Hollywood movies of the 1930s and 1940s. In the years that followed, the swimming club – which consisted of a 46m outdoor lido and a 33m indoor pool – became the place to see and be seen. It hosted fashion shows and attracted celebrities, but also acted as a respite from the city for ordinary Parisians like my mother. Molitor was designed by architect Lucien Pollet, who employed the finest craftspeople to create the

ironwork, terrazzo floors, mosaics, portholes and white railings that contributed to its cruise liner feel. The outdoor pool was surrounded by sun loungers, sandy ‘beaches’ and brightly coloured parasols. Bathing beauty contests and artist’s galas were held there and in 1946, French designer Louis Reard famously launched the first modern bikini there. It began to fall into disrepair in the 1970s as renovations became more expensive and in 1989 the keys were returned to Paris City Council. The complex remained closed for two decades until Colony Capital, associated with Bouygues Construction and Accorhotels, was awarded a tender for its restoration – one that would respect its unique history but also bring in a contemporary style in a nod to the edgy street artists who gathered there when it shut down. In 2014, the complex reopened under Accor’s MGallery brand. The pools had been demolished and rebuilt true to original designs and with colours, mosaics and balustrades all faithfully rerendered.