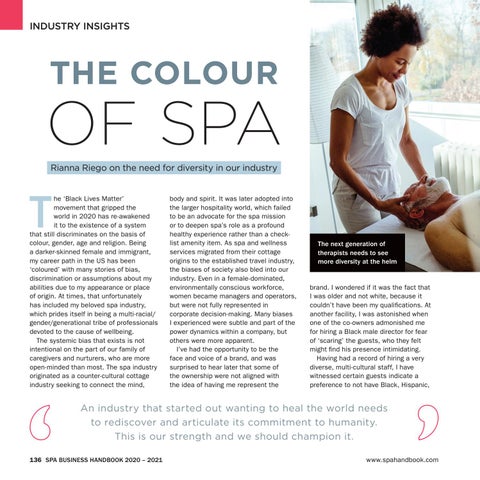 he ‘Black Lives Matter’ movement that gripped the world in 2020 has re-awakened it to the existence of a system that still discriminates on the basis of colour, gender, age and religion. Being a darker-skinned female and immigrant, my career path in the US has been ‘coloured’ with many stories of bias, discrimination or assumptions about my abilities due to my appearance or place of origin. At times, that unfortunately has included my beloved spa industry, which prides itself in being a multi-racial/ gender/generational tribe of professionals devoted to the cause of wellbeing. The systemic bias that exists is not intentional on the part of our family of caregivers and nurturers, who are more open-minded than most. The spa industry originated as a counter-cultural cottage industry seeking to connect the mind,

body and spirit. It was later adopted into the larger hospitality world, which failed to be an advocate for the spa mission or to deepen spa’s role as a profound healthy experience rather than a checklist amenity item. As spa and wellness services migrated from their cottage origins to the established travel industry, the biases of society also bled into our industry. Even in a female-dominated, environmentally conscious workforce, women became managers and operators, but were not fully represented in corporate decision-making. Many biases I experienced were subtle and part of the power dynamics within a company, but others were more apparent. I’ve had the opportunity to be the face and voice of a brand, and was surprised to hear later that some of the ownership were not aligned with the idea of having me represent the

brand. I wondered if it was the fact that I was older and not white, because it couldn’t have been my qualifications. At another facility, I was astonished when one of the co-owners admonished me for hiring a Black male director for fear of ‘scaring’ the guests, who they felt might find his presence intimidating. Having had a record of hiring a very diverse, multi-cultural staff, I have witnessed certain guests indicate a preference to not have Black, Hispanic,

An industry that started out wanting to heal the world needs to rediscover and articulate its commitment to humanity. This is our strength and we should champion it. 136 spa business HANDBOOK 2020 – 2021