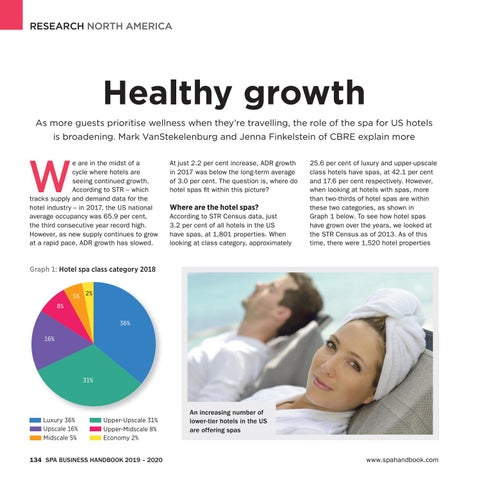 Healthy growth As more guests prioritise wellness when they’re travelling, the role of the spa for US hotels is broadening. Mark VanStekelenburg and Jenna Finkelstein of CBRE explain more

e are in the midst of a cycle where hotels are seeing continued growth. According to STR – which tracks supply and demand data for the hotel industry – in 2017, the US national average occupancy was 65.9 per cent, the third consecutive year record high. However, as new supply continues to grow at a rapid pace, ADR growth has slowed.

At just 2.2 per cent increase, ADR growth in 2017 was below the long-term average of 3.0 per cent. The question is, where do hotel spas fit within this picture?

Where are the hotel spas? According to STR Census data, just 3.2 per cent of all hotels in the US have spas, at 1,801 properties. When looking at class category, approximately

25.6 per cent of luxury and upper-upscale class hotels have spas, at 42.1 per cent and 17.6 per cent respectively. However, when looking at hotels with spas, more than two-thirds of hotel spas are within these two categories, as shown in Graph 1 below. To see how hotel spas have grown over the years, we looked at the STR Census as of 2013. As of this time, there were 1,520 hotel properties