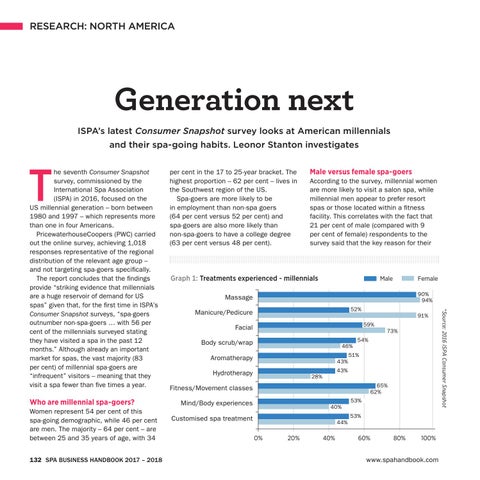 Male versus female spa-goers According to the survey, millennial women are more likely to visit a salon spa, while millennial men appear to prefer resort spas or those located within a fitness facility. This correlates with the fact that 21 per cent of male (compared with 9 per cent of female) respondents to the survey said that the key reason for their

he seventh Consumer Snapshot survey, commissioned by the International Spa Association (ISPA) in 2016, focused on the US millennial generation – born between 1980 and 1997 – which represents more than one in four Americans. PricewaterhouseCoopers (PWC) carried out the online survey, achieving 1,018 responses representative of the regional distribution of the relevant age group – and not targeting spa-goers specifically. The report concludes that the findings provide “striking evidence that millennials are a huge reservoir of demand for US spas” given that, for the first time in ISPA’s Consumer Snapshot surveys, “spa-goers outnumber non-spa-goers … with 56 per cent of the millennials surveyed stating they have visited a spa in the past 12 months.” Although already an important market for spas, the vast majority (83 per cent) of millennial spa-goers are “infrequent” visitors – meaning that they visit a spa fewer than five times a year.