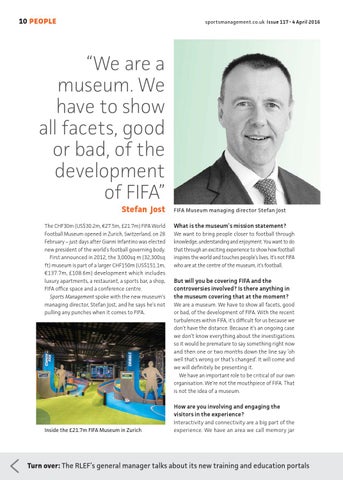 “We are a museum. We have to show all facets, good or bad, of the development of FIFA” Stefan Jost The CHF30m (US$30.2m, €27.5m, £21.7m) FIFA World Football Museum opened in Zurich, Switzerland, on 28 February – just days after Gianni Infantino was elected new president of the world’s football governing body. First announced in 2012, the 3,000sq m (32,300sq ft) museum is part of a larger CHF150m (US$151.1m, €137.7m, £108.6m) development which includes luxury apartments, a restaurant, a sports bar, a shop, FIFA oﬃce space and a conference centre. Sports Management spoke with the new museum’s managing director, Stefan Jost, and he says he’s not pulling any punches when it comes to FIFA.

8IBUJTUIFNVTFVNTNJTTJPOTUBUFNFOU We want to bring people closer to football through knowledge, understanding and enjoyment. You want to do that through an exciting experience to show how football inspires the world and touches people’s lives. It’s not FIFA who are at the centre of the museum, it’s football.

#VUXJMMZPVCFDPWFSJOH'*'"BOEUIF DPOUSPWFSTJFTJOWPMWFE *TUIFSFBOZUIJOHJO UIFNVTFVNDPWFSJOHUIBUBUUIFNPNFOU  We are a museum. We have to show all facets, good or bad, of the development of FIFA. With the recent turbulences within FIFA, it’s diﬃcult for us because we don’t have the distance. Because it’s an ongoing case we don’t know everything about the investigations so it would be premature to say something right now and then one or two months down the line say ‘oh well that’s wrong or that’s changed’. It will come and we will deﬁnitely be presenting it. We have an important role to be critical of our own organisation. We’re not the mouthpiece of FIFA. That is not the idea of a museum.

Interactivity and connectivity are a big part of the experience. We have an area we call memory jar

Turn over: The RLEF’s general manager talks about its new training and education portals