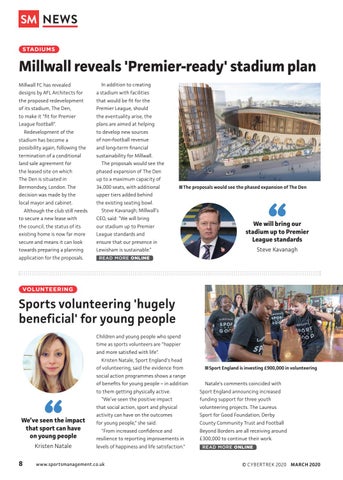 designs by AFL Architects for

a stadium with facilities

that would be fit for the

of its stadium, The Den,

to make it "fit for Premier

the eventuality arise, the

League football". Redevelopment of the

plans are aimed at helping to develop new sources

stadium has become a

termination of a conditional

The proposals would see the

the leased site on which

phased expansion of The Den

The Den is situated in

up to a maximum capacity of

decision was made by the

Although the club still needs

■■The proposals would see the phased expansion of The Den

to secure a new lease with

CEO, said: “We will bring

the council, the status of its

our stadium up to Premier

secure and means it can look

ensure that our presence in

In addition to creating

towards preparing a planning

application for the proposals.

social action programmes shows a range of benefits for young people – in addition to them getting physically active. “We’ve seen the positive impact

that social action, sport and physical

activity can have on the outcomes

for young people," she said.

"From increased confidence and

Beyond Borders are all receiving around

resilience to reporting improvements in

levels of happiness and life satisfaction."