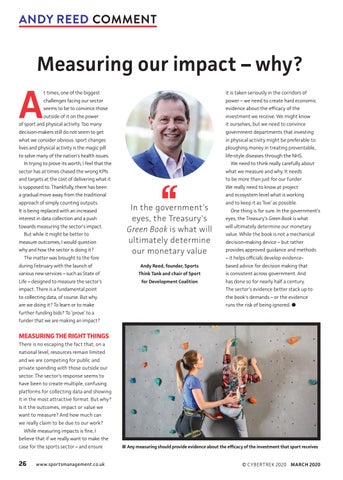 measuring our impact – why?

t times, one of the biggest

it is taken seriously in the corridors of

seems to be to convince those

evidence about the efficacy of the

outside of it on the power

of sport and physical activity. Too many

it ourselves, but we need to convince

decision-makers still do not seem to get

what we consider obvious: sport changes

lives and physical activity is the magic pill

to solve many of the nation's health issues.

life-style diseases through the NHS. We need to think really carefully about

In trying to prove its worth, I feel that the sector has at times chased the wrong KPIs

what we measure and why. It needs

and targets at the cost of delivering what it

to be more than just for our funder.

is supposed to. Thankfully, there has been

We really need to know at project

a gradual move away from the traditional

and ecosystem level what is working

approach of simply counting outputs. It is being replaced with an increased interest in data collection and a push towards measuring the sector's impact. But while it might be better to measure outcomes, I would question why and how the sector is doing it? The matter was brought to the fore

In the government's eyes, the Treasury's Green Book is what will ultimately determine our monetary value

and to keep it as ‘live’ as possible. One thing is for sure. In the government's eyes, the Treasury's Green Book is what will ultimately determine our monetary value. While the book is not a mechanical decision-making device – but rather provides approved guidance and methods – it helps officials develop evidence-

based advice for decision making that

various new services – such as State of

Think Tank and chair of sport

is consistent across government. And

Life – designed to measure the sector's

has done so for nearly half a century.

during February with the launch of

impact. There is a fundamental point

The sector's evidence better stack up to

to collecting data, of course. But why

the book's demands – or the evidence

are we doing it? To learn or to make

runs the risk of being ignored. ●

further funding bids? To ‘prove’ to a funder that we are making an impact?

measuring The righT Things There is no escaping the fact that, on a national level, resources remain limited and we are competing for public and private spending with those outside our sector. The sector's response seems to have been to create multiple, confusing platforms for collecting data and showing it in the most attractive format. But why? Is it the outcomes, impact or value we want to measure? And how much can we really claim to be due to our work? While measuring impacts is fine, I believe that if we really want to make the case for the sports sector – and ensure