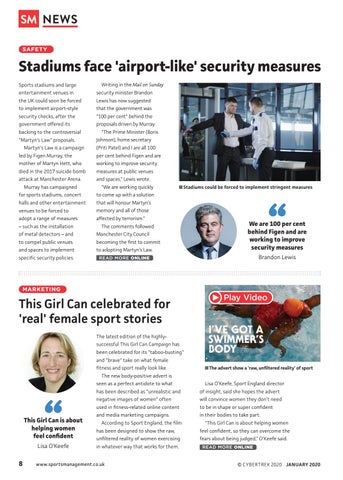 the UK could soon be forced

that the government was

security checks, after the

government offered its backing to the controversial "Martyn's Law" proposals. Martyn's Law is a campaign

proposals driven by Murray. "The Prime Minister (Boris Johnson), home secretary (Priti Patel) and I are all 100

led by Figen Murray, the

per cent behind Figen and are

mother of Martyn Hett, who

"We are working quickly

to come up with a solution

halls and other entertainment

that will honour Martyn’s

venues to be forced to

memory and all of those

adopt a range of measures

– such as the installation

■ Stadiums could be forced to implement stringent measures

of metal detectors – and

becoming the first to commit

Writing in the Mail on Sunday

and spaces to implement

■ The advert show a 'raw, unfiltered reality' of sport

This Girl Can is about helping women feel confident Lisa O'Keefe

has been described as "unrealistic and

of insight, said she hopes the advert

will convince women they don’t need

to be in shape or super confident

in their bodies to take part.

According to Sport England, the film has been designed to show the raw,

"This Girl Can is about helping women feel confident, so they can overcome the

fears about being judged," O'Keefe said.

in whatever way that works for them.