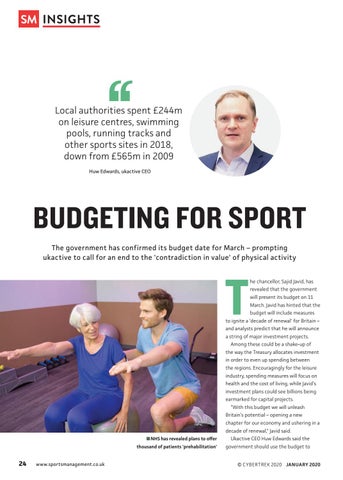 Local authorities spent £244m on leisure centres, swimming pools, running tracks and other sports sites in 2018, down from £565m in 2009

he chancellor, Sajid Javid, has revealed that the government will present its budget on 11 March. Javid has hinted that the budget will include measures

to ignite a 'decade of renewal' for Britain – and analysts predict that he will announce a string of major investment projects. Among these could be a shake-up of the way the Treasury allocates investment in order to even up spending between the regions. Encouragingly for the leisure industry, spending measures will focus on health and the cost of living, while Javid’s investment plans could see billions being earmarked for capital projects. “With this budget we will unleash Britain’s potential – opening a new chapter for our economy and ushering in a decade of renewal," Javid said.

■■NHS has revealed plans to offer

government should use the budget to © Cybertrek 2020 JANUARY 2020