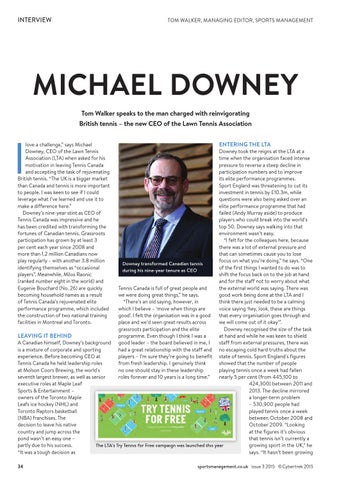 love a challenge,” says Michael Downey, CEO of the Lawn Tennis Association (LTA) when asked for his motivation in leaving Tennis Canada and accepting the task of rejuvenating British tennis. “The UK is a bigger market than Canada and tennis is more important to people. I was keen to see if I could leverage what I’ve learned and use it to make a difference here.” Downey’s nine-year stint as CEO of Tennis Canada was impressive and he has been credited with transforming the fortunes of Canadian tennis. Grassroots participation has grown by at least 3 per cent each year since 2008 and more than 1.2 million Canadians now play regularly – with another 3.8 million identifying themselves as “occasional players”. Meanwhile, Milos Raonic (ranked number eight in the world) and Eugenie Bouchard (No. 26) are quickly becoming household names as a result of Tennis Canada’s rejuvenated elite performance programme, which included the construction of two national training facilities in Montreal and Toronto.

Downey took the reigns at the LTA at a time when the organisation faced intense pressure to reverse a steep decline in participation numbers and to improve its elite performance programmes. Sport England was threatening to cut its investment in tennis by £10.3m, while questions were also being asked over an elite performance programme that had failed (Andy Murray aside) to produce players who could break into the world’s top 50. Downey says walking into that environment wasn’t easy. “I felt for the colleagues here, because there was a lot of external pressure and that can sometimes cause you to lose focus on what you’re doing,” he says. “One Downey transformed Canadian tennis of the first things I wanted to do was to during his nine-year tenure as CEO shift the focus back on to the job at hand and for the staff not to worry about what the external world was saying. There was Tennis Canada is full of great people and good work being done at the LTA and I we were doing great things,” he says. think there just needed to be a calming “There’s an old saying, however, in voice saying ‘hey, look, these are things which I believe – ‘move when things are that every organisation goes through and good’. I felt the organisation was in a good we will come out of it okay’”. place and we’d seen great results across grassroots participation and the elite Downey recognised the size of the task programme. Even though I think I was a at hand and while he was keen to shield LEAVING IT BEHIND staff from external pressures, there was A Canadian himself, Downey’s background good leader – the board believed in me, I had a great relationship with the staff and no escaping cold hard truths about the is a mixture of corporate and sporting players – I’m sure they’re going to benefit state of tennis. Sport England&#39;s figures experience. Before becoming CEO at showed that the number of people from fresh leadership. I genuinely think Tennis Canada he held leadership roles playing tennis once a week had fallen no one should stay in these leadership at Molson Coors Brewing, the world&#39;s nearly 5 per cent (from 445,100 to roles forever and 10 years is a long time.” seventh largest brewer, as well as senior 424,300) between 2011 and executive roles at Maple Leaf 2013. The decline mirrored Sports &amp; Entertainment – a longer-term problem owners of the Toronto Maple – 530,900 people had Leafs ice hockey (NHL) and played tennis once a week Toronto Raptors basketball between October 2008 and (NBA) franchises. The October 2009. “Looking decision to leave his native at the figures it’s obvious country and jump across the that tennis isn’t currently a pond wasn’t an easy one – growing sport in the UK,” he partly due to his success. The LTA’s Try Tennis for Free campaign was launched this year says. “It hasn’t been growing “It was a tough decision as