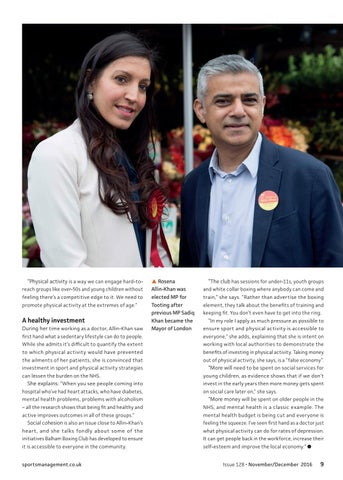 “Physical activity is a way we can engage hard-toreach groups like over-50s and young children without feeling there’s a competitive edge to it. We need to promote physical activity at the extremes of age.”

A healthy investment During her time working as a doctor, Allin-Khan saw

“The club has sessions for under-11s, youth groups and white collar boxing where anybody can come and train,” she says. “Rather than advertise the boxing element, they talk about the benefits of training and keeping fit. You don’t even have to get into the ring.

first hand what a sedentary lifestyle can do to people.

everyone,” she adds, explaining that she is intent on

While she admits it’s difficult to quantify the extent

working with local authorities to demonstrate the

to which physical activity would have prevented

the ailments of her patients, she is convinced that

out of physical activity, she says, is a “false economy”.

“More will need to be spent on social services for

can lessen the burden on the NHS.

She explains: “When you see people coming into hospital who’ve had heart attacks, who have diabetes,

young children, as evidence shows that if we don’t invest in the early years then more money gets spent on social care later on,” she says.

“More money will be spent on older people in the

– all the research shows that being fit and healthy and

NHS, and mental health is a classic example. The

active improves outcomes in all of these groups.”

mental health budget is being cut and everyone is

Social cohesion is also an issue close to Allin-Khan’s

heart, and she talks fondly about some of the

what physical activity can do for rates of depression.

It can get people back in the workforce, increase their

it is accessible to everyone in the community.

self-esteem and improve the local economy.” ●