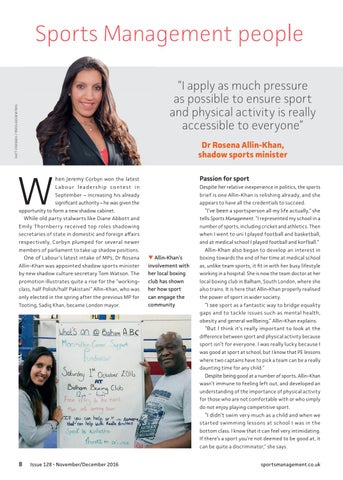 “I apply as much pressure as possible to ensure sport and physical activity is really accessible to everyone” Dr Rosena Allin-Khan, shadow sports minister

Despite her relative inexperience in politics, the sports

brief is one Allin-Khan is relishing already, and she

significant authority – he was given the

appears to have all the credentials to succeed.

“I’ve been a sportsperson all my life actually,” she

tells Sports Management. “I represented my school in a

number of sports, including cricket and athletics. Then

secretaries of state in domestic and foreign aff airs

when I went to uni I played football and basketball,

and at medical school I played football and korfball.”

Allin-Khan also began to develop an interest in

members of parliament to take up shadow positions.

One of Labour’s latest intake of MPs, Dr Rosena Allin-Khan was appointed shadow sports minister by new shadow culture secretary Tom Watson. The promotion illustrates quite a rise for the “workingclass, half Polish/half Pakistani” Allin-Khan, who was only elected in the spring after the previous MP for Tooting, Sadiq Khan, became London mayor.

boxing towards the end of her time at medical school as, unlike team sports, it fit in with her busy lifestyle working in a hospital. She is now the team doctor at her local boxing club in Balham, South London, where she also trains. It is here that Allin-Khan properly realised the power of sport in wider society.

“I see sport as a fantastic way to bridge equality gaps and to tackle issues such as mental health, obesity and general wellbeing,” Allin-Khan explains.

“But I think it’s really important to look at the difference between sport and physical activity because sport isn’t for everyone. I was really lucky because I was good at sport at school, but I know that PE lessons where two captains have to pick a team can be a really daunting time for any child.”

Despite being good at a number of sports, Allin-Khan wasn’t immune to feeling left out, and developed an understanding of the importance of physical activity for those who are not comfortable with or who simply do not enjoy playing competitive sport.

“I didn’t swim very much as a child and when we started swimming lessons at school I was in the bottom class. I know that it can feel very intimidating. If there’s a sport you’re not deemed to be good at, it can be quite a discriminator,” she says.