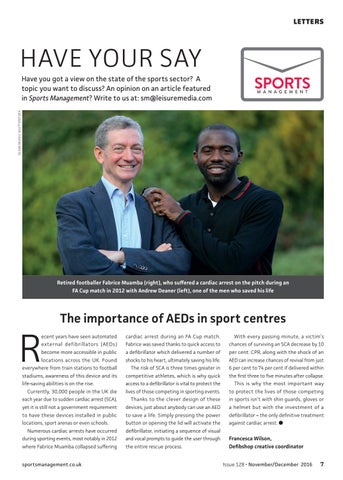 HAVE YOUR SAY OLESIA BILKEI / SHUTTERSTOCK

Have you got a view on the state of the sports sector? A topic you want to discuss? An opinion on an article featured in Sports Management? Write to us at: sm@leisuremedia.com

Retired footballer Fabrice Muamba (right), who suffered a cardiac arrest on the pitch during an FA Cup match in 2012 with Andrew Deaner (left), one of the men who saved his life

The importance of AEDs in sport centres

With every passing minute, a victim’s

chances of surviving an SCA decrease by 10

a defibrillator which delivered a number of

per cent. CPR, along with the shock of an

locations across the UK. Found

shocks to his heart, ultimately saving his life.

AED can increase chances of revival from just

everywhere from train stations to football

The risk of SCA is three times greater in

6 per cent to 74 per cent if delivered within

stadiums, awareness of this device and its

competitive athletes, which is why quick

the first three to five minutes after collapse.

life-saving abilities is on the rise.

access to a defibrillator is vital to protect the

This is why the most important way

lives of those competing in sporting events.

to protect the lives of those competing

each year due to sudden cardiac arrest (SCA),

Thanks to the clever design of these

in sports isn’t with shin guards, gloves or

yet it is still not a government requirement

devices, just about anybody can use an AED

a helmet but with the investment of a

to have these devices installed in public

to save a life. Simply pressing the power

defibrillator – the only definitive treatment

locations, sport arenas or even schools.

button or opening the lid will activate the

defibrillator, initiating a sequence of visual

during sporting events, most notably in 2012

and vocal prompts to guide the user through