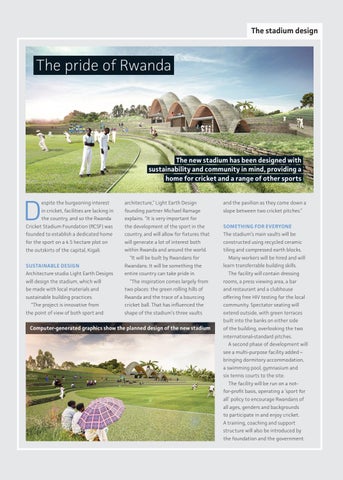 The pride of Rwanda

The new stadium has been designed with sustainability and community in mind, providing a home for cricket and a range of other sports

and the pavilion as they come down a

in cricket, facilities are lacking in

the country, and so the Rwanda

explains. “It is very important for

the development of the sport in the

founded to establish a dedicated home

country, and will allow for fixtures that

The stadium’s main vaults will be

for the sport on a 4.5 hectare plot on

will generate a lot of interest both

the outskirts of the capital, Kigali.

within Rwanda and around the world.

“It will be built by Rwandans for SUSTAINABLE DESIGN

Rwandans. It will be something the

entire country can take pride in.

will design the stadium, which will

“The inspiration comes largely from

Many workers will be hired and will learn transferrable building skills. The facility will contain dressing rooms, a press viewing area, a bar

be made with local materials and

and restaurant and a clubhouse

Rwanda and the trace of a bouncing

“The project is innovative from

cricket ball. That has influenced the

the point of view of both sport and

shape of the stadium’s three vaults

extend outside, with green terraces built into the banks on either side

Computer-generated graphics show the planned design of the new stadium

of the building, overlooking the two international-standard pitches. A second phase of development will see a multi-purpose facility added – bringing dormitory accommodation, a swimming pool, gymnasium and six tennis courts to the site. The facility will be run on a notfor-profit basis, operating a ‘sport for all’ policy to encourage Rwandans of all ages, genders and backgrounds to participate in and enjoy cricket. A training, coaching and support structure will also be introduced by the foundation and the government.