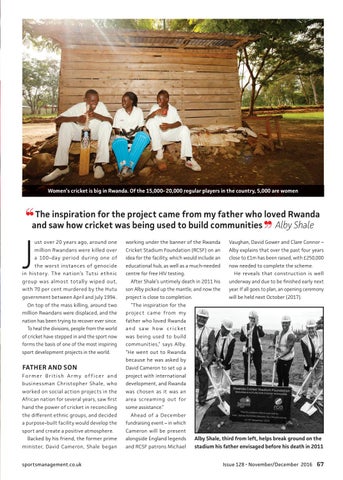 ust over 20 years ago, around one

working under the banner of the Rwanda

million Rwandans were killed over

Cricket Stadium Foundation (RCSF) on an

Alby explains that over the past four years

idea for the facility, which would include an

the worst instances of genocide

educational hub, as well as a much-needed

now needed to complete the scheme.

He reveals that construction is well

group was almost totally wiped out,

After Shale’s untimely death in 2011 his

underway and due to be finished early next

with 70 per cent murdered by the Hutu

son Alby picked up the mantle, and now the

year. If all goes to plan, an opening ceremony

government between April and July 1994.

project is close to completion.

On top of the mass killing, around two

“The inspiration for the

million Rwandans were displaced, and the

project came from my

nation has been trying to recover ever since.

To heal the divisions, people from the world

of cricket have stepped in and the sport now

was being used to build

forms the basis of one of the most inspiring

sport development projects in the world.

“He went out to Rwanda

David Cameron to set up a

worked on social action projects in the

was chosen as it was an

area screaming out for

hand the power of cricket in reconciling

because he was asked by

the different ethnic groups, and decided

Ahead of a December

a purpose-built facility would develop the

fundraising event – in which

sport and create a positive atmosphere.

Cameron will be present

Backed by his friend, the former prime

Alby Shale, third from left, helps break ground on the stadium his father envisaged before his death in 2011 Issue 128  November/December 2016 67