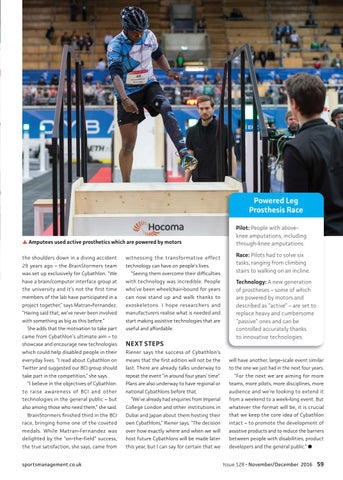 29 years ago – the BrainStormers team

technology can have on people’s lives.

was set up exclusively for Cybathlon. “We

“Seeing them overcome their difficulties

have a brain/computer interface group at

with technology was incredible. People

the university and it’s not the first time

who’ve been wheelchair-bound for years

members of the lab have participated in a

can now stand up and walk thanks to

exoskeletons. I hope researchers and

“Having said that, we’ve never been involved

manufacturers realise what is needed and

with something as big as this before.”

start making assistive technologies that are

She adds that the motivation to take part

came from Cybathlon’s ultimate aim – to

Pilot: People with aboveknee amputations, including through-knee amputations. Race: Pilots had to solve six tasks, ranging from climbing stairs to walking on an incline. Technology: A new generation of prostheses – some of which are powered by motors and described as “active” – are set to replace heavy and cumbersome “passive” ones and can be controlled accurately thanks to innovative technologies.

which could help disabled people in their

Riener says the success of Cybathlon’s

everyday lives. “I read about Cybathlon on

means that the first edition will not be the

will have another, large-scale event similar

last. There are already talks underway to

to the one we just had in the next four years.

take part in the competition,” she says.

repeat the event “in around four years’ time”.

“For the next we are aiming for more

Plans are also underway to have regional or

audience and we’re looking to extend it

“I believe in the objectives of Cybathlon: to raise awareness of BCI and other technologies in the general public – but

“We’ve already had enquiries from Imperial

from a weekend to a week-long event. But

also among those who need them,” she said.

College London and other institutions in

whatever the format will be, it is crucial

BrainStormers finished third in the BCI

Dubai and Japan about them hosting their

that we keep the core idea of Cybathlon

race, bringing home one of the coveted

own Cybathlons,” Riener says. “The decision

intact – to promote the development of

over how exactly where and when we will

assistive products and to reduce the barriers

delighted by the “on-the-field” success,

host future Cybathlons will be made later

between people with disabilities, product

the true satisfaction, she says, came from

this year, but I can say for certain that we

developers and the general public.” ●