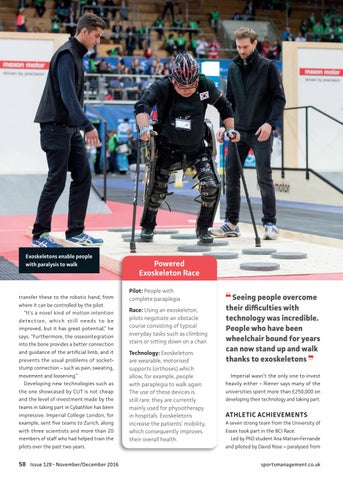 transfer these to the robotic hand, from where it can be controlled by the pilot. “It’s a novel kind of motion intention detection, which still needs to be improved, but it has great potential,” he says. “Furthermore, the osseointegration into the bone provides a better connection and guidance of the artificial limb, and it prevents the usual problems of socketstump connection – such as pain, sweating, movement and loosening.” Developing new technologies such as the one showcased by CUT is not cheap and the level of investment made by the teams in taking part in Cybathlon has been impressive. Imperial College London, for example, sent five teams to Zurich, along with three scientists and more than 20 members of staff who had helped train the pilots over the past two years.

Powered Exoskeleton Race Pilot: People with complete paraplegia Race: Using an exoskeleton, pilots negotiate an obstacle course consisting of typical everyday tasks such as climbing stairs or sitting down on a chair. Technology: Exoskeletons are wearable, motorised supports (orthoses) which allow, for example, people with paraplegia to walk again. The use of these devices is still rare; they are currently mainly used for physiotherapy in hospitals. Exoskeletons increase the patients’ mobility, which consequently improves their overall health.

Seeing people overcome their difficulties with technology was incredible. People who have been wheelchair bound for years can now stand up and walk thanks to exoskeletons Imperial wasn’t the only one to invest heavily either – Riener says many of the universities spent more than £250,000 on developing their technology and taking part.

ATHLETIC ACHIEVEMENTS A seven strong team from the University of Essex took part in the BCI Race. Led by PhD student Ana Matran-Fernande and piloted by David Rose – paralysed from sportsmanagement.co.uk