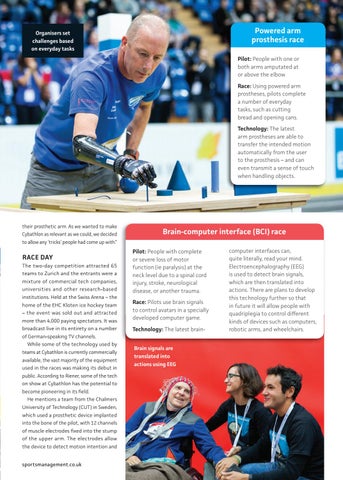 Pilot: People with one or both arms amputated at or above the elbow Race: Using powered arm prostheses, pilots complete a number of everyday tasks, such as cutting bread and opening cans. Technology: The latest arm prostheses are able to transfer the intended motion automatically from the user to the prosthesis – and can even transmit a sense of touch when handling objects.

their prosthetic arm. As we wanted to make Cybathlon as relevant as we could, we decided

to allow any ‘tricks’ people had come up with.”

RACE DAY The two-day competition attracted 65 teams to Zurich and the entrants were a mixture of commercial tech companies, universities and other research-based institutions. Held at the Swiss Arena – the

Pilot: People with complete or severe loss of motor function (ie paralysis) at the neck level due to a spinal cord injury, stroke, neurological disease, or another trauma.

more than 4,000 paying spectators. It was

broadcast live in its entirety on a number

computer interfaces can, quite literally, read your mind. Electroencephalography (EEG) is used to detect brain signals, which are then translated into actions. There are plans to develop this technology further so that in future it will allow people with quadriplegia to control different kinds of devices such as computers, robotic arms, and wheelchairs.

of German-speaking TV channels. While some of the technology used by teams at Cybathlon is currently commercially available, the vast majority of the equipment used in the races was making its debut in

public. According to Riener, some of the tech on show at Cybathlon has the potential to become pioneering in its field. He mentions a team from the Chalmers University of Technology (CUT) in Sweden, which used a prosthetic device implanted into the bone of the pilot, with 12 channels of muscle electrodes fixed into the stump of the upper arm. The electrodes allow the device to detect motion intention and sportsmanagement.co.uk