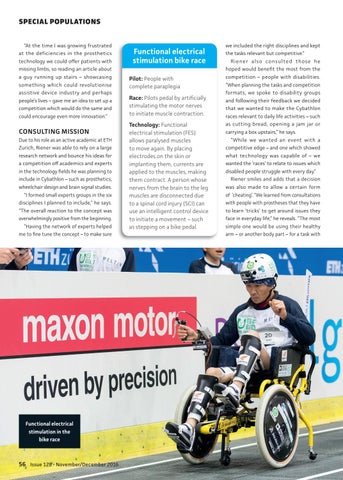 something which could revolutionise assistive device industry and perhaps people’s lives – gave me an idea to set up a competition which would do the same and could encourage even more innovation.”

CONSULTING MISSION Due to his role as an active academic at ETH Zurich, Riener was able to rely on a large research network and bounce his ideas for a competition off academics and experts in the technology fields he was planning to include in Cybathlon – such as prosthetics, wheelchair design and brain signal studies. “I formed small experts groups in the six disciplines I planned to include,” he says. “The overall reaction to the concept was overwhelmingly positive from the beginning. “Having the network of experts helped me to fine tune the concept – to make sure

the tasks relevant but competitive.” Riener also consulted those he hoped would benefit the most from the

missing limbs, so reading an article about a guy running up stairs – showcasing

we included the right disciplines and kept

Pilot: People with complete paraplegia Race: Pilots pedal by artificially stimulating the motor nerves to initiate muscle contraction. Technology: Functional electrical stimulation (FES) allows paralysed muscles to move again. By placing electrodes on the skin or implanting them, currents are applied to the muscles, making them contract. A person whose nerves from the brain to the leg muscles are disconnected due to a spinal cord injury (SCI) can use an intelligent control device to initiate a movement – such as stepping on a bike pedal.

competition – people with disabilities. “When planning the tasks and competition formats, we spoke to disability groups and following their feedback we decided that we wanted to make the Cybathlon races relevant to daily life activities – such as cutting bread, opening a jam jar or carrying a box upstairs,” he says. “While we wanted an event with a competitive edge – and one which showed what technology was capable of – we wanted the ‘races’ to relate to issues which disabled people struggle with every day.” Riener smiles and adds that a decision was also made to allow a certain form of ‘cheating’. “We learned from consultations with people with prostheses that they have to learn ‘tricks’ to get around issues they face in everyday life,” he reveals. ”The most simple one would be using their healthy arm – or another body part – for a task with