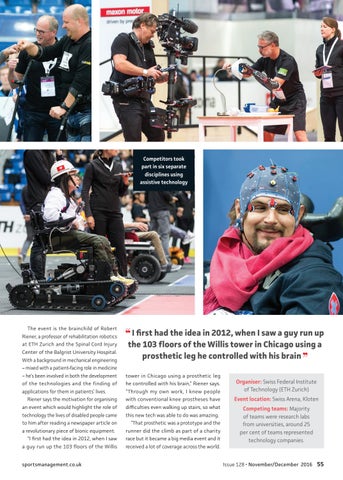 The event is the brainchild of Robert Riener, a professor of rehabilitation robotics at ETH Zurich and the Spinal Cord Injury Center of the Balgrist University Hospital. With a background in mechanical engineering

I first had the idea in 2012, when I saw a guy run up the 103 floors of the Willis tower in Chicago using a prosthetic leg he controlled with his brain

of the technologies and the finding of

he controlled with his brain,” Riener says.

applications for them in patients’ lives.

“Through my own work, I knew people

Riener says the motivation for organising

with conventional knee prostheses have

an event which would highlight the role of

difficulties even walking up stairs, so what

this new tech was able to do was amazing.

Competing teams: Majority of teams were research labs from universities, around 25 per cent of teams represented technology companies.

to him after reading a newspaper article on a revolutionary piece of bionic equipment.

race but it became a big media event and it

a guy run up the 103 floors of the Willis

received a lot of coverage across the world.