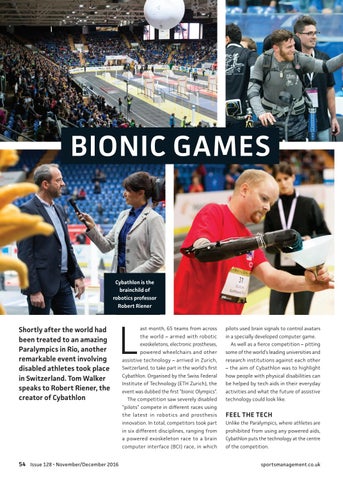 Cybathlon is the brainchild of robotics professor Robert Riener

Shortly after the world had been treated to an amazing Paralympics in Rio, another remarkable event involving disabled athletes took place in Switzerland. Tom Walker speaks to Robert Riener, the creator of Cybathlon

ast month, 65 teams from across

the world – armed with robotic

in a specially developed computer game.

As well as a fierce competition – pitting

powered wheelchairs and other

some of the world’s leading universities and

research institutions against each other

Switzerland, to take part in the world's first

– the aim of Cybathlon was to highlight

Cybathlon. Organised by the Swiss Federal

how people with physical disabilities can

Institute of Technology (ETH Zurich), the

be helped by tech aids in their everyday

activities and what the future of assistive

the latest in robotics and prosthesis

Unlike the Paralympics, where athletes are

in six different disciplines, ranging from

prohibited from using any powered aids,

a powered exoskeleton race to a brain

Cybathlon puts the technology at the centre

computer interface (BCI) race, in which