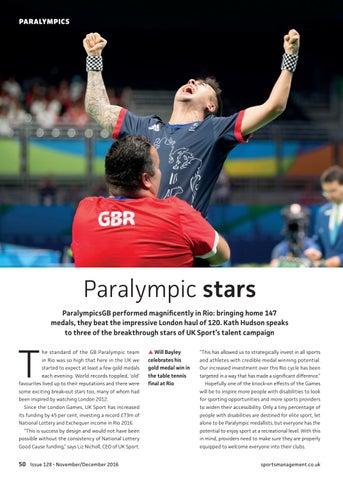 he standard of the GB Paralympic team in Rio was so high that here in the UK we started to expect at least a few gold medals each evening. World records toppled, ‘old’

favourites lived up to their reputations and there were

“This has allowed us to strategically invest in all sports and athletes with credible medal winning potential. Our increased investment over this Rio cycle has been targeted in a way that has made a significant difference.” Hopefully one of the knock-on effects of the Games

some exciting break-out stars too, many of whom had

will be to inspire more people with disabilities to look

been inspired by watching London 2012.

Since the London Games, UK Sport has increased

to widen their accessibility. Only a tiny percentage of

its funding by 45 per cent, investing a record £73m of

people with disabilities are destined for elite sport, let

alone to be Paralympic medallists, but everyone has the

“This is success by design and would not have been

potential to enjoy sport at a recreational level. With this

possible without the consistency of National Lottery

in mind, providers need to make sure they are properly

equipped to welcome everyone into their clubs.