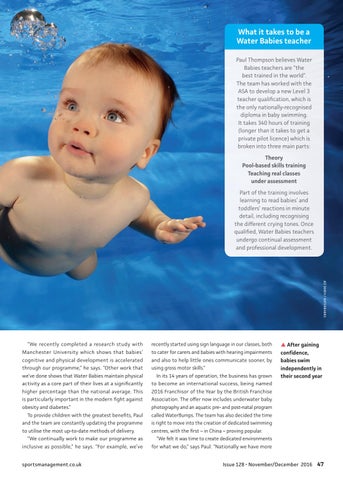 What it takes to be a Water Babies teacher Paul Thompson believes Water Babies teachers are “the best trained in the world”. The team has worked with the ASA to develop a new Level 3 teacher qualification, which is the only nationally-recognised diploma in baby swimming. It takes 340 hours of training (longer than it takes to get a private pilot licence) which is broken into three main parts: Theory Pool-based skills training Teaching real classes under assessment Part of the training involves learning to read babies’ and toddlers’ reactions in minute detail, including recognising the different crying tones. Once qualified, Water Babies teachers undergo continual assessment and professional development.

“We recently completed a research study with

recently started using sign language in our classes, both

Manchester University which shows that babies’

to cater for carers and babies with hearing impairments

cognitive and physical development is accelerated

and also to help little ones communicate sooner, by

through our programme,” he says. “Other work that

In its 14 years of operation, the business has grown

activity as a core part of their lives at a significantly

to become an international success, being named

higher percentage than the national average. This

2016 Franchisor of the Year by the British Franchise

is particularly important in the modern fight against

photography and an aquatic pre- and post-natal program

To provide children with the greatest benefits, Paul

called WaterBumps. The team has also decided the time

and the team are constantly updating the programme

is right to move into the creation of dedicated swimming

to utilise the most up-to-date methods of delivery.

centres, with the first – in China – proving popular.

“We continually work to make our programme as

“We felt it was time to create dedicated environments

inclusive as possible,” he says. “For example, we’ve

for what we do,” says Paul. “Nationally we have more