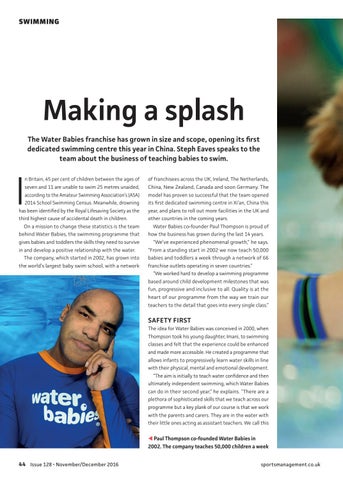 Making a splash The Water Babies franchise has grown in size and scope, opening its first dedicated swimming centre this year in China. Steph Eaves speaks to the team about the business of teaching babies to swim.

n Britain, 45 per cent of children between the ages of

of franchisees across the UK, Ireland, The Netherlands,

seven and 11 are unable to swim 25 metres unaided,

according to the Amateur Swimming Association’s (ASA)

model has proven so successful that the team opened

its first dedicated swimming centre in Xi’an, China this

has been identified by the Royal Lifesaving Society as the

year, and plans to roll out more facilities in the UK and

third highest cause of accidental death in children.

other countries in the coming years.

On a mission to change these statistics is the team behind Water Babies, the swimming programme that gives babies and toddlers the skills they need to survive in and develop a positive relationship with the water. The company, which started in 2002, has grown into the world’s largest baby swim school, with a network

Water Babies co-founder Paul Thompson is proud of how the business has grown during the last 14 years. “We’ve experienced phenomenal growth,” he says. “From a standing start in 2002 we now teach 50,000 babies and toddlers a week through a network of 66 franchise outlets operating in seven countries.” “We worked hard to develop a swimming programme based around child development milestones that was fun, progressive and inclusive to all. Quality is at the heart of our programme from the way we train our teachers to the detail that goes into every single class.”

SAFETY FIRST The idea for Water Babies was conceived in 2000, when Thompson took his young daughter, Imani, to swimming classes and felt that the experience could be enhanced and made more accessible. He created a programme that allows infants to progressively learn water skills in line with their physical, mental and emotional development. “The aim is initially to teach water confidence and then ultimately independent swimming, which Water Babies can do in their second year,” he explains. “There are a plethora of sophisticated skills that we teach across our programme but a key plank of our course is that we work with the parents and carers. They are in the water with their little ones acting as assistant teachers. We call this