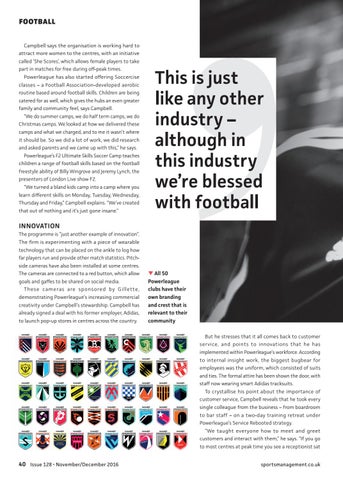 FOOTBALL Campbell says the organisation is working hard to attract more women to the centres, with an initiative called ‘She Scores’, which allows female players to take part in matches for free during off-peak times. Powerleague has also started offering Soccercise classes – a Football Association-developed aerobic routine based around football skills. Children are being catered for as well, which gives the hubs an even greater family and community feel, says Campbell. “We do summer camps, we do half term camps, we do Christmas camps. We looked at how we delivered these camps and what we charged, and to me it wasn’t where it should be. So we did a lot of work, we did research and asked parents and we came up with this,” he says. Powerleague’s F2 Ultimate Skills Soccer Camp teaches children a range of football skills based on the football freestyle ability of Billy Wingrove and Jeremy Lynch, the presenters of London Live show F2. “We turned a bland kids camp into a camp where you learn different skills on Monday, Tuesday, Wednesday, Thursday and Friday,” Campbell explains. “We’ve created that out of nothing and it’s just gone insane.”

INNOVATION The programme is “just another example of innovation”. The firm is experimenting with a piece of wearable technology that can be placed on the ankle to log how far players run and provide other match statistics. Pitchside cameras have also been installed at some centres. The cameras are connected to a red button, which allow goals and gaffes to be shared on social media. These cameras are sponsored by Gillette, demonstrating Powerleague’s increasing commercial creativity under Campbell’s stewardship. Campbell has already signed a deal with his former employer, Adidas, to launch pop-up stores in centres across the country.

 All 50 Powerleague clubs have their own branding and crest that is relevant to their community But he stresses that it all comes back to customer service, and points to innovations that he has implemented within Powerleague’s workforce. According to internal insight work, the biggest bugbear for employees was the uniform, which consisted of suits and ties. The formal attire has been shown the door, with staff now wearing smart Adidas tracksuits. To crystallise his point about the importance of customer service, Campbell reveals that he took every single colleague from the business – from boardroom to bar staff – on a two-day training retreat under Powerleague’s Service Rebooted strategy. “We taught everyone how to meet and greet customers and interact with them,” he says. “If you go to most centres at peak time you see a receptionist sat