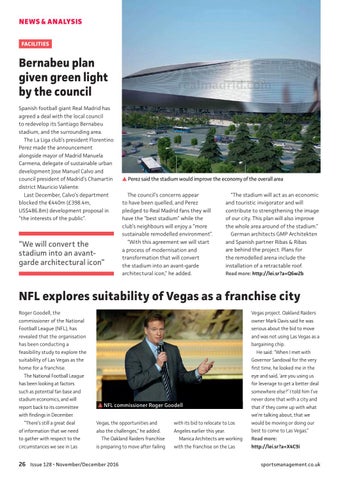 “We will convert the stadium into an avantgarde architectural icon”

Bernabeu plan given green light by the council

Perez said the stadium would improve the economy of the overall area The council’s concerns appear to have been quelled, and Perez pledged to Real Madrid fans they will have the “best stadium” while the club’s neighbours will enjoy a “more sustainable remodelled environment”. “With this agreement we will start a process of modernisation and transformation that will convert the stadium into an avant-garde architectural icon,” he added.

“The stadium will act as an economic and touristic invigorator and will contribute to strengthening the image of our city. This plan will also improve the whole area around of the stadium.” German architects GMP Architekten and Spanish partner Ribas & Ribas are behind the project. Plans for the remodelled arena include the installation of a retractable roof. Read more: http://lei.sr?a=Q6w2b

NFL explores suitability of Vegas as a franchise city Roger Goodell, the

commissioner of the National

owner Mark Davis said he was

serious about the bid to move

revealed that the organisation

and was not using Las Vegas as a

has been conducting a

feasibility study to explore the

He said: “When I met with

suitability of Las Vegas as the

Governor Sandoval for the very

home for a franchise.

first time, he looked me in the eye and said, ‘are you using us

The National Football League has been looking at factors

for leverage to get a better deal

such as potential fan base and

somewhere else?’ I told him I’ve

stadium economics, and will report back to its committee

that if they come up with what we’re talking about, that we

with findings in December. “There’s still a great deal

never done that with a city and

Vegas, the opportunities and

with its bid to relocate to Los

would be moving or doing our

also the challenges,” he added.

best to come to Las Vegas.”

The Oakland Raiders franchise is preparing to move after failing

Manica Architects are working with the franchise on the Las