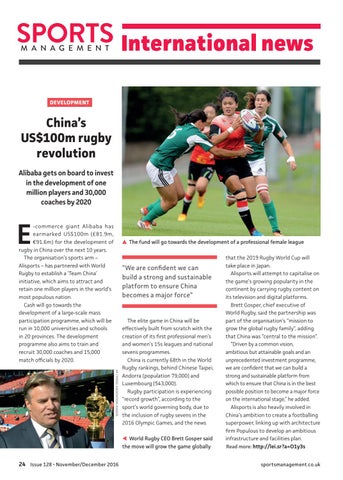 China’s US$100m rugby revolution Alibaba gets on board to invest in the development of one million players and 30,000 coaches by 2020

-commerce giant Alibaba has earmarked US$100m (£81.9m, €91.6m) for the development of rugby in China over the next 10 years. The organisation’s sports arm – Alisports – has partnered with World Rugby to establish a ‘Team China’ initiative, which aims to attract and retain one million players in the world’s most populous nation. Cash will go towards the development of a large-scale mass participation programme, which will be run in 10,000 universities and schools in 20 provinces. The development programme also aims to train and recruit 30,000 coaches and 15,000 match officials by 2020.

The elite game in China will be effectively built from scratch with the creation of its first professional men’s and women’s 15s leagues and national sevens programmes. China is currently 68th in the World Rugby rankings, behind Chinese Taipei, Andorra (population 79,000) and Luxembourg (543,000). Rugby participation is experiencing “record growth”, according to the sport’s world governing body, due to the inclusion of rugby sevens in the 2016 Olympic Games, and the news  World Rugby CEO Brett Gosper said the move will grow the game globally

that the 2019 Rugby World Cup will take place in Japan. Alisports will attempt to capitalise on the game’s growing popularity in the continent by carrying rugby content on its television and digital platforms. Brett Gosper, chief executive of World Rugby, said the partnership was part of the organisation’s “mission to grow the global rugby family”, adding that China was “central to the mission”. “Driven by a common vision, ambitious but attainable goals and an unprecedented investment programme, we are confident that we can build a strong and sustainable platform from which to ensure that China is in the best possible position to become a major force on the international stage,” he added. Alisports is also heavily involved in China’s ambition to create a footballing superpower, linking up with architecture firm Populous to develop an ambitious infrastructure and facilities plan. Read more: http://lei.sr?a=O1y3s sportsmanagement.co.uk