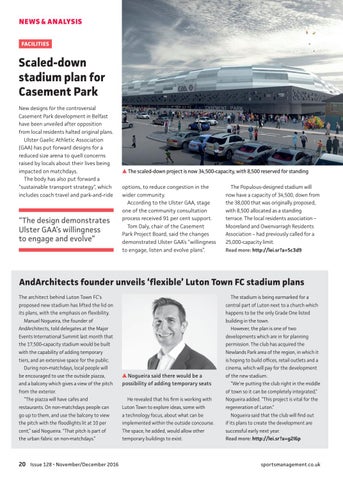 Scaled-down stadium plan for Casement Park New designs for the controversial Casement Park development in Belfast have been unveiled after opposition from local residents halted original plans. Ulster Gaelic Athletic Association (GAA) has put forward designs for a reduced size arena to quell concerns raised by locals about their lives being impacted on matchdays. The body has also put forward a “sustainable transport strategy”, which includes coach travel and park-and-ride

“The design demonstrates Ulster GAA’s willingness to engage and evolve”

The scaled-down project is now 34,500-capacity, with 8,500 reserved for standing options, to reduce congestion in the wider community. According to the Ulster GAA, stage one of the community consultation process received 91 per cent support. Tom Daly, chair of the Casement Park Project Board, said the changes demonstrated Ulster GAA’s “willingness to engage, listen and evolve plans”.

The Populous-designed stadium will now have a capacity of 34,500, down from the 38,000 that was originally proposed, with 8,500 allocated as a standing terrace. The local residents association – Mooreland and Owenvarragh Residents Association – had previously called for a 25,000-capacity limit. Read more: http://lei.sr?a=5c3d9

The stadium is being earmarked for a

proposed new stadium has lifted the lid on

central part of Luton next to a church which

its plans, with the emphasis on flexibility.

happens to be the only Grade One listed

Manuel Nogueira, the founder of

building in the town.

AndArchitects, told delegates at the Major

However, the plan is one of two

developments which are in for planning

the 17,500-capacity stadium would be built

permission. The club has acquired the

with the capability of adding temporary

Newlands Park area of the region, in which it

tiers, and an extensive space for the public.

is hoping to build offices, retail outlets and a

During non-matchdays, local people will be encouraged to use the outside piazza, and a balcony which gives a view of the pitch

cinema, which will pay for the development

Nogueira said there would be a possibility of adding temporary seats

from the exterior. “The piazza will have cafes and

of the new stadium. “We’re putting the club right in the middle of town so it can be completely integrated,”

He revealed that his firm is working with

Nogueira added. “This project is vital for the

restaurants. On non-matchdays people can

Luton Town to explore ideas, some with

go up to them, and use the balcony to view

a technology focus, about what can be

the pitch with the floodlights lit at 10 per

implemented within the outside concourse.

if its plans to create the development are

cent,” said Nogueira. “That pitch is part of

The space, he added, would allow other

the urban fabric on non-matchdays.”

regeneration of Luton.” Nogueira said that the club will find out