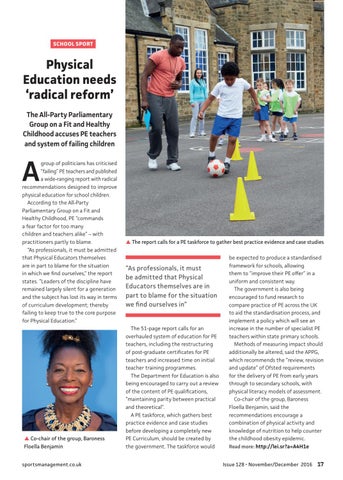 group of politicians has criticised “failing” PE teachers and published a wide-ranging report with radical recommendations designed to improve physical education for school children. According to the All-Party Parliamentary Group on a Fit and Healthy Childhood, PE “commands a fear factor for too many children and teachers alike” – with practitioners partly to blame. “As professionals, it must be admitted that Physical Educators themselves are in part to blame for the situation in which we find ourselves,” the report states. “Leaders of the discipline have remained largely silent for a generation and the subject has lost its way in terms of curriculum development; thereby failing to keep true to the core purpose for Physical Education.”

“As professionals, it must be admitted that Physical Educators themselves are in part to blame for the situation we find ourselves in”

The 51-page report calls for an overhauled system of education for PE teachers, including the restructuring of post-graduate certificates for PE teachers and increased time on initial teacher training programmes. The Department for Education is also being encouraged to carry out a review of the content of PE qualifications, “maintaining parity between practical and theoretical”. A PE taskforce, which gathers best practice evidence and case studies before developing a completely new PE Curriculum, should be created by the government. The taskforce would

be expected to produce a standardised framework for schools, allowing them to “improve their PE offer” in a uniform and consistent way. The government is also being encouraged to fund research to compare practice of PE across the UK to aid the standardisation process, and implement a policy which will see an increase in the number of specialist PE teachers within state primary schools. Methods of measuring impact should additionally be altered, said the APPG, which recommends the “review, revision and update” of Ofsted requirements for the delivery of PE from early years through to secondary schools, with physical literacy models of assessment. Co-chair of the group, Baroness Floella Benjamin, said the recommendations encourage a combination of physical activity and knowledge of nutrition to help counter the childhood obesity epidemic. Read more: http://lei.sr?a=A4H1e Issue 128  November/December 2016 17