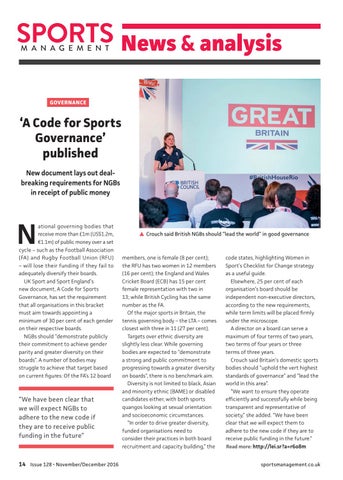 ational governing bodies that receive more than £1m (US$1.2m, €1.1m) of public money over a set cycle – such as the Football Association (FA) and Rugby Football Union (RFU) – will lose their funding if they fail to adequately diversify their boards. UK Sport and Sport England’s new document, A Code for Sports Governance, has set the requirement that all organisations in this bracket must aim towards appointing a minimum of 30 per cent of each gender on their respective boards. NGBs should “demonstrate publicly their commitment to achieve gender parity and greater diversity on their boards”. A number of bodies may struggle to achieve that target based on current figures: Of the FA’s 12 board

members, one is female (8 per cent); the RFU has two women in 12 members (16 per cent); the England and Wales Cricket Board (ECB) has 15 per cent female representation with two in 13; while British Cycling has the same number as the FA. Of the major sports in Britain, the tennis governing body – the LTA – comes closest with three in 11 (27 per cent). Targets over ethnic diversity are slightly less clear. While governing bodies are expected to “demonstrate a strong and public commitment to progressing towards a greater diversity on boards”, there is no benchmark aim. Diversity is not limited to black, Asian and minority ethnic (BAME) or disabled candidates either, with both sports quangos looking at sexual orientation and socioeconomic circumstances. “In order to drive greater diversity, funded organisations need to consider their practices in both board recruitment and capacity building,” the

code states, highlighting Women in Sport’s Checklist for Change strategy as a useful guide. Elsewhere, 25 per cent of each organisation’s board should be independent non-executive directors, according to the new requirements, while term limits will be placed firmly under the microscope. A director on a board can serve a maximum of four terms of two years, two terms of four years or three terms of three years. Crouch said Britain’s domestic sports bodies should “uphold the vert highest standards of governance” and “lead the world in this area”. “We want to ensure they operate efficiently and successfully while being transparent and representative of society,” she added. “We have been clear that we will expect them to adhere to the new code if they are to receive public funding in the future.” Read more: http://lei.sr?a=r6o8m sportsmanagement.co.uk