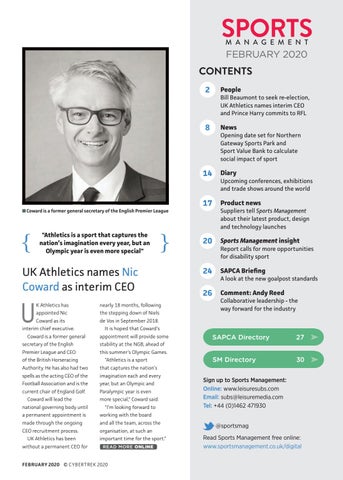 ■■Coward is a former general secretary of the English Premier League

"Athletics is a sport that captures the nation’s imagination every year, but an Olympic year is even more special"

the stepping down of Niels

stability at the NGB, ahead of

this summer's Olympic Games. "Athletics is a sport

Authority. He has also had two

that captures the nation’s

spells as the acting CEO of the

imagination each and every

Football Association and is the

year, but an Olympic and

Paralympic year is even

Coward will lead the national governing body until

a permanent appointment is

working with the board

made through the ongoing

and all the team, across the

organisation, at such an

UK Athletics has been without a permanent CEO for

It is hoped that Coward's appointment will provide some

secretary of the English of the British Horseracing