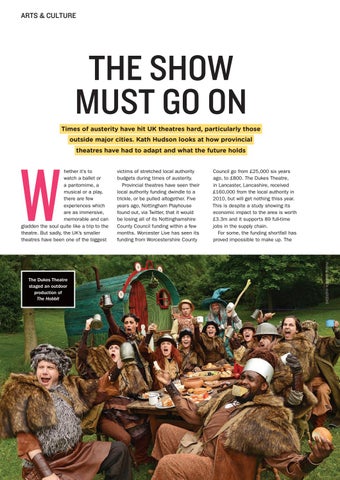 THE SHOW MUST GO ON Times of austerity have hit UK theatres hard, particularly those outside major cities. Kath Hudson looks at how provincial theatres have had to adapt and what the future holds

hether it’s to watch a ballet or a pantomime, a musical or a play, there are few experiences which are as immersive, memorable and can gladden the soul quite like a trip to the theatre. But sadly, the UK’s smaller theatres have been one of the biggest

victims of stretched local authority budgets during times of austerity. Provincial theatres have seen their local authority funding dwindle to a trickle, or be pulled altogether. Five years ago, Nottingham Playhouse found out, via Twitter, that it would be losing all of its Nottinghamshire County Council funding within a few months. Worcester Live has seen its funding from Worcestershire County

Council go from £25,000 six years ago, to £800. The Dukes Theatre, in Lancaster, Lancashire, received £160,000 from the local authority in 2010, but will get nothing thiss year. This is despite a study showing its economic impact to the area is worth £3.3m and it supports 89 full-time jobs in the supply chain. For some, the funding shortfall has proved impossible to make up. The

The Dukes Theatre staged an outdoor production of The Hobbit