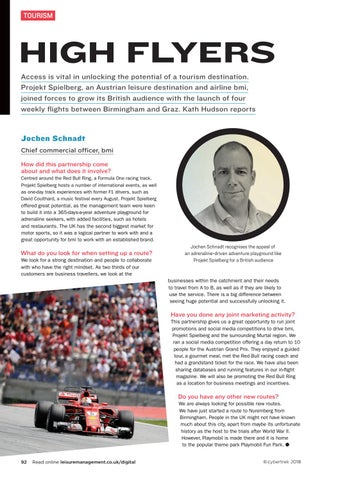 HIGH FLYERS Access is vital in unlocking the potential of a tourism destination. Projekt Spielberg, an Austrian leisure destination and airline bmi, joined forces to grow its British audience with the launch of four weekly flights between Birmingham and Graz. Kath Hudson reports

Jochen Schnadt Chief commercial officer, bmi How did this partnership come about and what does it involve? Centred around the Red Bull Ring, a Formula One racing track, Projekt Spielberg hosts a number of international events, as well as one-day track experiences with former F1 drivers, such as David Coulthard, a music festival every August. Projekt Spielberg

offered great potential, as the management team were keen to build it into a 365-days-a-year adventure playground for adrenaline seekers, with added facilities, such as hotels and restaurants. The UK has the second biggest market for motor sports, so it was a logical partner to work with and a great opportunity for bmi to work with an established brand.

What do you look for when setting up a route? We look for a strong destination and people to collaborate with who have the right mindset. As two thirds of our customers are business travellers, we look at the

businesses within the catchment and their needs to travel from A to B, as well as if they are likely to use the service. There is a big difference between seeing huge potential and successfully unlocking it.

Have you done any joint marketing activity? This partnership gives us a great opportunity to run joint promotions and social media competitions to drive bmi, Projekt Spielberg and the surrounding Murtal region. We ran a social media competition offering a day return to 10 people for the Austrian Grand Prix. They enjoyed a guided tour, a gourmet meal, met the Red Bull racing coach and had a grandstand ticket for the race. We have also been sharing databases and running features in our in-flight magazine. We will also be promoting the Red Bull Ring as a location for business meetings and incentives.

Do you have any other new routes? We are always looking for possible new routes. We have just started a route to Nuremberg from Birmingham. People in the UK might not have known much about this city, apart from maybe its unfortunate history as the host to the trials after World War II. However, Playmobil is made there and it is home to the popular theme park Playmobil Fun Park. â&amp;#x2014;? 92