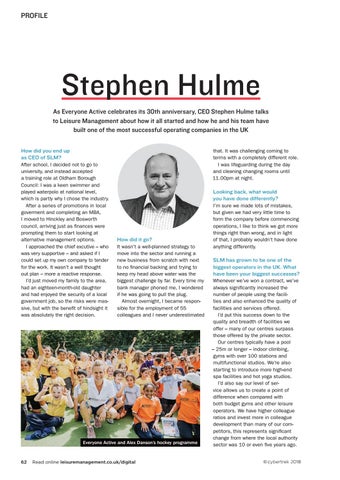 Stephen hulme As everyone Active celebrates its 30th anniversary, Ceo Stephen hulme talks to leisure management about how it all started and how he and his team have built one of the most successful operating companies in the uK How did you end up as CEO of SLM? After school, I decided not to go to university, and instead accepted a training role at Oldham Borough Council: I was a keen swimmer and played waterpolo at national level, which is partly why I chose the industry. After a series of promotions in local goverment and completing an MBA, I moved to Hinckley and Bosworth council, arriving just as finances were prompting them to start looking at alternative management options. I approached the chief excutive – who was very supportive – and asked if I could set up my own company to tender for the work. It wasn’t a well thought out plan – more a reactive response. I’d just moved my family to the area, had an eighteen-month-old daughter and had enjoyed the security of a local government job, so the risks were massive, but with the benefit of hindsight it was absolutely the right decision.

that. It was challenging coming to terms with a completely different role. I was lifeguarding during the day and cleaning changing rooms until 11.00pm at night.

Looking back, what would you have done differently?

How did it go? It wasn’t a well-planned strategy to move into the sector and running a new business from scratch with next to no financial backing and trying to keep my head above water was the biggest challenge by far. Every time my bank manager phoned me, I wondered if he was going to pull the plug. Almost overnight, I became responsible for the employment of 55 colleagues and I never underestimated

I’m sure we made lots of mistakes, but given we had very little time to form the company before commencing operations, I like to think we got more things right than wrong, and in light of that, I probably wouldn’t have done anything differently.

SLM has grown to be one of the biggest operators in the UK. What have been your biggest successes? Whenever we’ve won a contract, we’ve always significantly increased the number of people using the facilities and also enhanced the quality of facilities and services offered. I’d put this success down to the quality and breadth of facilities we offer – many of our centres surpass those offered by the private sector. Our centres typically have a pool – 25m or longer – indoor climbing, gyms with over 100 stations and multifunctional studios. We’re also starting to introduce more high-end spa facilities and hot yoga studios. I’d also say our level of service allows us to create a point of difference when compared with both budget gyms and other leisure operators. We have higher colleague ratios and invest more in colleague development than many of our competitors, this represents significant change from where the local authority sector was 10 or even five years ago. © cybertrek 2018