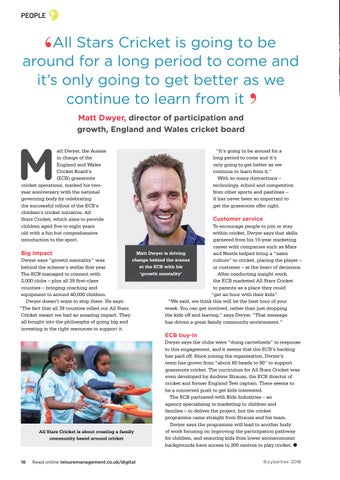 Matt Dwyer, director of participation and growth, England and Wales cricket board

att Dwyer, the Aussie in charge of the England and Wales Cricket Board’s (ECB) grassroots cricket operations, marked his twoyear anniversary with the national governing body by celebrating the successful rollout of the ECB’s children’s cricket initiative, All Stars Cricket, which aims to provide children aged five to eight years old with a fun but comprehensive introduction to the sport.

“It’s going to be around for a long period to come and it’s only going to get better as we continue to learn from it.” With so many distractions – technology, school and competition from other sports and pastimes – it has never been so important to get the grassroots offer right.

To encourage people to join or stay within cricket, Dwyer says that skills garnered from his 15-year marketing career with companies such as Mars Matt Dwyer is driving Big impact and Nestle helped bring a “sales change behind the scenes Dwyer says “growth mentality” was culture” to cricket, placing the player – at the ECB with his behind the scheme’s stellar first year. or customer – at the heart of decisions. ‘growth mentality’ The ECB managed to connect with After conducting insight work, 2,000 clubs – plus all 39 first-class the ECB marketed All Stars Cricket counties – bringing coaching and to parents as a place they could equipment to around 40,000 children. “get an hour with their kids”. Dwyer doesn’t want to stop there. He says: “We said, we think this will be the best hour of your “The fact that all 39 counties rolled out All Stars week. You can get involved, rather than just dropping Cricket meant we had an amazing impact. They the kids off and leaving,” says Dwyer. “That message all bought into the philosophy of going big and has driven a great family community environment.” investing in the right resources to support it.

Dwyer says the clubs were “doing cartwheels” in response to this engagement, and it seems that the ECB’s backing has paid off. Since joining the organisation, Dwyer’s team has grown from “about 60 heads to 90” to support grassroots cricket. The curriculum for All Stars Cricket was even developed by Andrew Strauss, the ECB director of cricket and former England Test captain. There seems to be a concerted push to get kids interested. The ECB partnered with Kids Industries – an agency specialising in marketing to children and families – to deliver the project, but the cricket programme came straight from Strauss and his team. Dwyer says the programme will lead to another body of work focusing on improving the participation pathway for children, and ensuring kids from lower socioeconomic backgrounds have access to 200 centres to play cricket. ● © cybertrek 2018