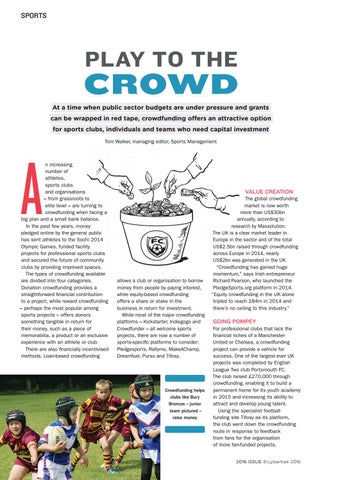 CROWD At a time when public sector budgets are under pressure and grants can be wrapped in red tape, crowdfunding offers an attractive option for sports clubs, individuals and teams who need capital investment Tom Walker, managing editor, Sports Management

n increasing number of athletes, sports clubs and organisations – from grassroots to elite level – are turning to crowdfunding when facing a big plan and a small bank balance. In the past few years, money pledged online by the general public has sent athletes to the Sochi 2014 Olympic Games, funded facility projects for professional sports clubs and secured the future of community clubs by providing improved spaces. The types of crowdfunding available are divided into four categories. Donation crowdfunding provides a straightforward financial contribution to a project, while reward crowdfunding – perhaps the most popular among sports projects – offers donors something tangible in return for their money, such as a piece of memorabilia, a product or an exclusive experience with an athlete or club. There are also financially incentivised methods. Loan-based crowdfunding

allows a club or organisation to borrow money from people by paying interest, while equity-based crowdfunding offers a share or stake in the business in return for investment. While most of the major crowdfunding platforms – Kickstarter, Indiegogo and Crowdfunder – all welcome sports projects, there are now a number of sports-specific platforms to consider: Pledgesports, Rallyme, MakeAChamp, Dreamfuel, Pursu and Tifosy.

The global crowdfunding market is now worth more than US$30bn annually, according to research by Massolution. The UK is a clear market leader in Europe in the sector and of the total US$2.5bn raised through crowdfunding across Europe in 2014, nearly US$2bn was generated in the UK. “Crowdfunding has gained huge momentum,” says Irish entrepreneur Richard Pearson, who launched the PledgeSports.org platform in 2014. “Equity crowdfunding in the UK alone tripled to reach £84m in 2014 and there’s no ceiling to this industry.”

GOING POMPEY For professional clubs that lack the financial riches of a Manchester United or Chelsea, a crowdfunding project can provide a vehicle for success. One of the largest ever UK projects was completed by English League Two club Portsmouth FC. The club raised £270,000 through crowdfunding, enabling it to build a permanent home for its youth academy in 2015 and increasing its ability to attract and develop young talent. Using the specialist football funding site Tifosy as its platform, the club went down the crowdfunding route in response to feedback from fans for the organisation of more fan-funded projects. 2016 ISSUE © cybertrek 2016