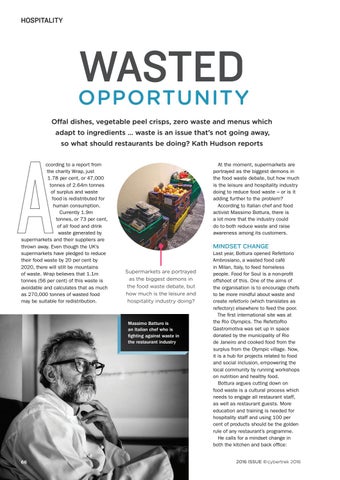 OPPORTUNITY Offal dishes, vegetable peel crisps, zero waste and menus which adapt to ingredients ... waste is an issue that’s not going away, so what should restaurants be doing? Kath Hudson reports ccording to a report from the charity Wrap, just 1.78 per cent, or 47,000 tonnes of 2.64m tonnes of surplus and waste food is redistributed for human consumption. Currently 1.9m tonnes, or 73 per cent, of all food and drink waste generated by supermarkets and their suppliers are thrown away. Even though the UK’s supermarkets have pledged to reduce their food waste by 20 per cent by 2020, there will still be mountains of waste. Wrap believes that 1.1m tonnes (56 per cent) of this waste is avoidable and calculates that as much as 270,000 tonnes of wasted food may be suitable for redistribution.

At the moment, supermarkets are portrayed as the biggest demons in the food waste debate, but how much is the leisure and hospitality industry doing to reduce food waste – or is it adding further to the problem? According to Italian chef and food activist Massimo Bottura, there is a lot more that the industry could do to both reduce waste and raise awareness among its customers.

Supermarkets are portrayed as the biggest demons in the food waste debate, but how much is the leisure and hospitality industry doing?

Last year, Bottura opened Refettorio Ambrosiano, a wasted food café in Milan, Italy, to feed homeless people. Food for Soul is a non-profit offshoot of this. One of the aims of the organisation is to encourage chefs to be more mindful about waste and create refettorio (which translates as refectory) elsewhere to feed the poor. The first international site was at the Rio Olympics. The RefettoRio Gastromotiva was set up in space donated by the municipality of Rio de Janeiro and cooked food from the surplus from the Olympic village. Now, it is a hub for projects related to food and social inclusion, empowering the local community by running workshops on nutrition and healthy food. Bottura argues cutting down on food waste is a cultural process which needs to engage all restaurant staff, as well as restaurant guests. More education and training is needed for hospitality staff and using 100 per cent of products should be the golden rule of any restaurant’s programme. He calls for a mindset change in both the kitchen and back office: 2016 ISSUE ©cybertrek 2016