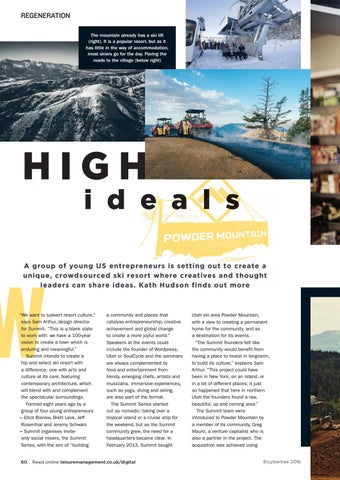 REGENERATION The mountain already has a ski lift (right). It is a popular resort, but as it has little in the way of accommodation, most skiers go for the day. Paving the roads to the village (below right)

A group of young US entrepreneurs is setting out to create a unique, crowdsourced ski resort where creatives and thought leaders can share ideas. Kath Hudson finds out more

“We want to subvert resort culture,” says Sam Arthur, design director for Summit. “This is a blank slate to work with: we have a 100-year vision to create a town which is enduring and meaningful.” Summit intends to create a hip and select ski resort with a difference: one with arts and culture at its core, featuring contemporary architecture, which will blend with and complement the spectacular surroundings. Formed eight years ago by a group of four young entrepreneurs – Elliot Bisnow, Brett Leve, Jeff Rosenthal and Jeremy Schwarz – Summit organises inviteonly social mixers, the Summit Series, with the aim of “building 60

a community and places that catalyse entrepreneurship, creative achievement and global change to create a more joyful world.” Speakers at the events could include the founder of Wordpress, Uber or SoulCycle and the seminars are always complemented by food and entertainment from trendy, emerging chefs, artists and musicians. Immersive experiences, such as yoga, diving and skiing, are also part of the format. The Summit Series started out as nomadic: taking over a tropical island or a cruise ship for the weekend, but as the Summit community grew, the need for a headquarters became clear. In February 2013, Summit bought

Utah ski area Powder Mountain, with a view to creating a permanent home for the community, and as a destination for its events. “The Summit founders felt like the community would benefit from having a place to invest in long-term, to build its culture,” explains Sam Arthur. “This project could have been in New York, on an island, or in a lot of different places; it just so happened that here in northern Utah the founders found a raw, beautiful, up and coming area.” The Summit team were introduced to Powder Mountain by a member of its community, Greg Mauro, a venture capitalist who is also a partner in the project. The acquisition was achieved using © cybertrek 2016