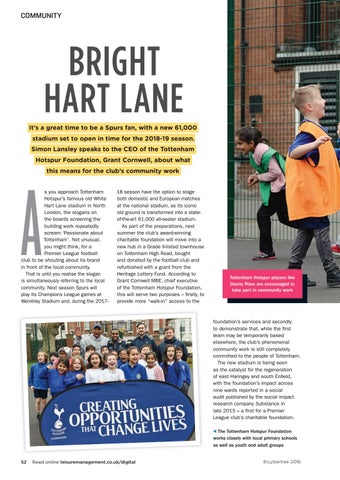 BRIGHT HART LANE It’s a great time to be a Spurs fan, with a new 61,000 stadium set to open in time for the 2018-19 season. Simon Lansley speaks to the CEO of the Tottenham Hotspur Foundation, Grant Cornwell, about what this means for the club’s community work

s you approach Tottenham Hotspur’s famous old White Hart Lane stadium in North London, the slogans on the boards screening the building work repeatedly scream ‘Passionate about Tottenham’. Not unusual, you might think, for a Premier League football club to be shouting about its brand in front of the local community. That is until you realise the slogan is simultaneously referring to the local community. Next season Spurs will play its Champions League games at Wembley Stadium and, during the 2017-

18 season have the option to stage both domestic and European matches at the national stadium, as its iconic old ground is transformed into a stateof-the-art 61,000 all-seater stadium. As part of the preparations, next summer the club’s award-winning charitable foundation will move into a new hub in a Grade II-listed townhouse on Tottenham High Road, bought and donated by the football club and refurbished with a grant from the Heritage Lottery Fund. According to Grant Cornwell MBE, chief executive of the Tottenham Hotspur Foundation, this will serve two purposes – firstly, to provide more “walk-in” access to the

foundation’s services and secondly to demonstrate that, while the first team may be temporarily based elsewhere, the club’s phenomenal community work is still completely committed to the people of Tottenham. The new stadium is being seen as the catalyst for the regeneration of east Haringey and south Enfield, with the foundation’s impact across nine wards reported in a social audit published by the social impact research company Substance in late 2015 – a first for a Premier League club’s charitable foundation. The Tottenham Hotspur Foundation works closely with local primary schools as well as youth and adult groups 52