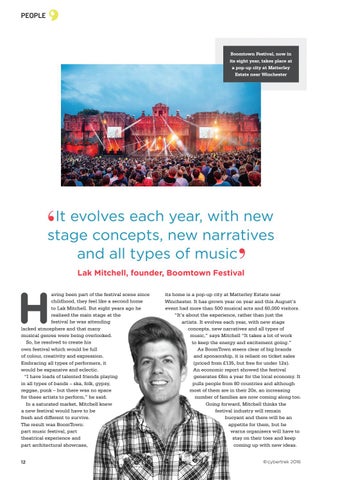 Boomtown Festival, now in its eight year, takes place at a pop-up city at Matterley Estate near Winchester

It evolves each year, with new stage concepts, new narratives and all types of music

aving been part of the festival scene since childhood, they feel like a second home to Lak Mitchell. But eight years ago he realised the main stage at the festival he was attending lacked atmosphere and that many musical genres were being overlooked. So, he resolved to create his own festival which would be full of colour, creativity and expression. Embracing all types of performers, it would be expansive and eclectic. “I have loads of talented friends playing in all types of bands – ska, folk, gypsy, reggae, punk – but there was no space for these artists to perform,” he said. In a saturated market, Mitchell knew a new festival would have to be fresh and different to survive. The result was BoomTown: part music festival, part theatrical experience and part architectural showcase, 12

its home is a pop-up city at Matterley Estate near Winchester. It has grown year on year and this August’s event had more than 500 musical acts and 60,000 visitors. “It’s about the experience, rather than just the artists. It evolves each year, with new stage concepts, new narratives and all types of music,” says Mitchell “It takes a lot of work to keep the energy and excitement going.” As BoomTown steers clear of big brands and sponsorship, it is reliant on ticket sales (priced from £135, but free for under 12s). An economic report showed the festival generates £6m a year for the local economy. It pulls people from 80 countries and although most of them are in their 20s, an increasing number of families are now coming along too. Going forward, Mitchell thinks the festival industry will remain buoyant and there will be an appetite for them, but he warns organisers will have to stay on their toes and keep coming up with new ideas. © cybertrek 2016