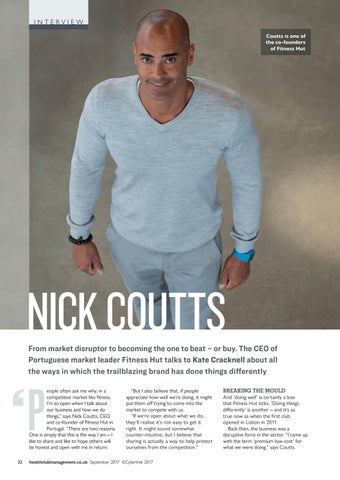 INTERVIEW Coutts is one of the co-founders of Fitness Hut

NICK COUTTS From market disruptor to becoming the one to beat – or buy. The CEO of Portuguese market leader Fitness Hut talks to Kate Cracknell about all the ways in which the trailblazing brand has done things differently

eople often ask me why, in a competitive market like fitness, I’m so open when I talk about our business and how we do things,” says Nick Coutts, CEO and co-founder of Fitness Hut in Portugal. “There are two reasons. One is simply that this is the way I am – I like to share and like to hope others will be honest and open with me in return.

“But I also believe that, if people appreciate how well we’re doing, it might put them off trying to come into the market to compete with us. “If we’re open about what we do, they’ll realise it’s not easy to get it right. It might sound somewhat counter-intuitive, but I believe that sharing is actually a way to help protect ourselves from the competition.”

BREAKING THE MOULD And ‘doing well’ is certainly a box that Fitness Hut ticks. ‘Doing things diﬀerently’ is another – and it’s as true now as when the first club opened in Lisbon in 2011. Back then, the business was a disruptive force in the sector. “I came up with the term ‘premium low-cost’ for what we were doing,” says Coutts.